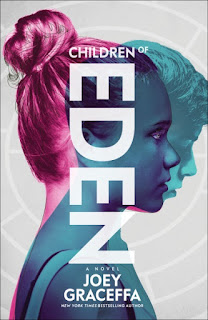 Eden is a closed world created when humanity was on the brink of destruction to save at least a few people until the ruined world was again fit for habitation. Rowan is a second child, illegal in Eden. Hidden by her family, she’s finally going to get a new identity and eye implants that will let her become a part of society. But she’ll also have to leave her family - and never return or see them again. In a fit of anger, she climbs the walls of her family home and escapes to the outside world, for a few hours of freedom. What happens during those hours creates rippling consequences that haunt the days that follow.

If you’ve read a lot of dystopian YA none of this will be particularly new to you. The story runs in fairly predictable ways. The characters are generally what makes these books different and Rowan is a wonderful protagonist. She’s willful and determined, scared when out of her depth but able to push past her fear. She causes a few of her own problems, so it’s a good thing she’s resilient. Making her bi, or at least uncertain about her sexuality (without making a big deal out of it) was wonderfully refreshing. I liked both Lark and Lachlan as supporting characters, though Lark’s got my vote if the story develops more of a romance in later books.

The story is quick and engaging. The world is well constructed. I thought it clever that there’s a fair amount of pre-Eden history but no Eden history. It gives the author options for the following books and I’m curious what he’ll do.

I found the created swear words rather distracting and unnecessary. Instead of coming off as expletives, they confused me and bumped me out of the narrative.

There’s a fair bit of violence including two torture scenes. Nothing is particularly graphic, and most of the violence has either a detached sense to it or is accompanied by the protagonist questioning the need for it and how the world should be better than this. There are a few kisses, but no other sexual content.

While this isn’t highly original, it is a fun, quick read that will have you turning pages. It’s set-up for a series, and leaves you interested in the world and what’s going to happen next to the characters.
Email ThisBlogThis!Share to TwitterShare to FacebookShare to Pinterest
Posted by Jessica Strider at 09:16