Many thanks as always to the publishers and authors who send me books. This is what I received this month:

Toru: Wayfarer Returns by Stephanie Sorensen - I'm part way through this and enjoying it so far. 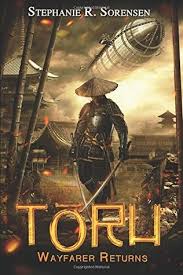 Revolutionary young samurai with dirigibles take on Commodore Perry and his Black Ships in this alternate history steampunk technofantasy set in 1850s samurai-era Japan. In Japan of 1852, the peace imposed by the Tokugawa Shoguns has lasted 250 years. Peace has turned to stagnation, however, as the commoners grow impoverished and their lords restless. Swords rust. Martial values decay. Foreign barbarians circle the island nation’s closed borders like vultures, growing ever more demanding. Toru, a shipwrecked young fisherman rescued by American traders and taken to America, defies the Shogun’s ban on returning to Japan, determined to save his homeland from foreign invasion. Can he rouse his countrymen in time? Or will the cruel Shogun carry out his vow to execute all who set foot in Japan after traveling abroad? Armed only with his will, a few books, dirigible plans and dangerous ideas, Toru must transform the Emperor’s realm before the Black Ships come. Toru: Wayfarer Returns is an alternate history steampunk technofantasy set in 1850s samurai-era Japan and is the first book in the Sakura Steam Series, an alternate history of the tumultuous period from the opening of Japan in 1853 to the Meiji Restoration in 1868. Readers who enjoy steampunk alternate histories more typically set in Victorian England or the American Wild West may enjoy this steampunk story made fresh by the Japanese samurai setting, as well as readers who enjoy historical fiction set in Japan.


Shame written by Lovern Kindzierski and illustrated by John Bolton - This is a mature graphic novel told through photorealistic watercolours. Review tomorrow. 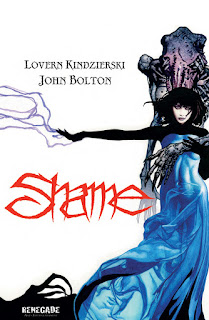 Collecting all three books in this acclaimed trilogy for the first time. When the purest woman on earth allows herself one selfish thought, it is enough to conceive the most evil woman the world has ever seen. The classic fantasy of good versus evil, mother versus daughter, as Virtue gets the daughter she wished for, Shame, and has to deal with the consequences of releasing this powerful woman to a world ill prepared for her campaign of evil. Also includes the first 10 pages of the first book in the Tales of Hope trilogy, John Bolton's original pencil layouts for the books, an interview with both Lovern and John about the trilogy, and additional background material.


Willful Child: Wrath of Betty by Steven Erikson - This is the second Willful Child novel. I have to admit, I tried the first one and found the humour too low brow for my tastes. 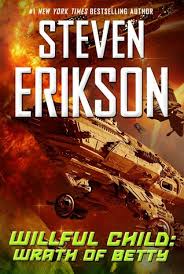 From New York Times bestselling author Steven Erikson comes Willful Child: Wrath of Betty, a new Science Fiction novel of devil-may-care, near calamitous, and downright chaotic adventures through the infinite vastness of interstellar space. These are the voyages of the starship A.S.F.Willful Child. Its ongoing mission: to seek out strange new worlds on which to plant the Terran flag, to subjugate and if necessary obliterate new life-forms, to boldly blow the...

And so we join the not-terribly-bright but exceedingly cock-sure Captain Hadrian Sawback and his motley crew on board the Starship Willful Child.

The New York Times bestselling author of the acclaimed Malazan Book of the Fallen series has taken his lifelong passion for Star Trek and transformed it into a smart, inventive, and hugely entertaining spoof on the whole mankind-exploring-space-for-the-good-of-all-species-but-trashing-stuff-with-a-lot-of-high-tech-gadgets-along-the-way, overblown adventure. The result is an Science Fiction novel that deftly parodies the genre while also paying fond homage to it.

The Dreaming Hunt by Cindy Dees and Bill Flippin - The second book in a fantasy adventure series. 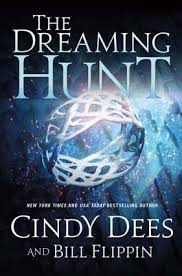 In Cindy Dees and Bill Flippin's The Sleeping King our intrepid adventurers found the imprisoned echo of a long lost king on the Dream Plane. He told them how to wake him in the mortal realm: find his lost regalia--crown, ring, sword, shield, and bow--and rejoin them with his sleeping body.

In The Dreaming Hunt, the heroes begin their quest. But they've caught the attention of powerful forces determined to stop them. Worse, their visit to the Dream Plane has unleashed chaos, and the fight is spilling over into the mortal realm.

They frantically outrun old enemies and pick up new ones: imperial hunters, a secret cabal of mages, a criminal league, and a changeling army. Are they just pawns in larger political dramas, or are they crystallizing into the nucleus of a rebellion? Can they find the regalia necessary to wake the Sleeping King before they are utterly destroyed?