Not a Review: Infoquake by David Louis Edelman

Not a Review looks at books I got a good way through before giving up on them. I’ll explain why I read so much and why I didn’t finish.  These are - by their nature - going to be predominately negative reviews.  They’ll also contain some amount of spoilers (though I’ll try not to give anything major away without a warning).
------------------------------ 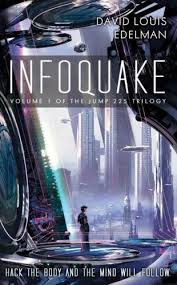 Cons: Natch’s lack of ethics made him unlikeable, lots of set-up for little payback, mystery kept too long

Natch, head of his own fiefcorp, wants to make the number one spot on Primo with their newest bio/logic system NiteFocus 48.

Infoquake sets up the Jump 225 trilogy by introducing the major players and futuristic world. Split into several sections, the first introduces Jara, a data analyst who works for the Natch fiefcorp. The second section goes through Natch’s life, explaining how he got to be where he is now. The third section, around 300 pages in, has Natch agree to take on a mysterious project. Only in the fourth section does he - and by extension the reader - finally learn what this project is, and what the trilogy is all about.

I really enjoyed the first section of the book.  Jara is an interesting character, stuck in a job she’s grown to hate, but who is easily manipulated by her unethical boss into doing things she doesn’t agree with.  She’s counting the days until her contract expires.  You’re thrown into the book with little explanation of the terms used, which was a bit confusing, but was overall a great way of immersing me in the new world.

The second section was interesting, though I didn’t like Natch and as time went on I actively started to hate him.  This section had a lot of world building, explaining a lot of terms and ideas, giving me a better grounding in how things work in this future.

The third section lost me.  I felt I had a handle on what was going on and how things worked, but this section seemed to bring in a whole new series of factors - more unexplored history, more unexplained terms.  I understand that Natch would be drawn to the mystery - and be willing to take it up with limited information, but I was losing interest in the story.  I also find it hard to root for a character when I don’t really want to see them succeed.  Rather than draw my interest, the mystery made me realize how little I cared for these people and this world.  I spent a week avoiding the book, reading a page or two and finding some other task to do.

Section four is where I finally gave up.  The reveal was such a let down.  Despite all the groundwork laid by the earlier sections I had no idea what the technology was supposed to do.  Learning that the characters didn’t either didn’t make me feel any better.  I wanted to know what happened so I skimmed the rest of the book.  The ending… was even more of a let down as it basically stops.  There’s no real climax - though maybe the presentation of the technology was meant to be the climax and I didn’t get the proper feel of that because I only skimmed the lead up to it.

I also realized, after skimming the ending, that there’s a comprehensive appendix at the back that explains terminology and history.  Wish I’d realized that earlier - though the book does a decent job of giving you necessary information eventually, I’m sure the information contained in the appendix would have clarified things for me.

Now, the presentation did - finally - explain what this new technology does, and it is quite fascinating.  So maybe the next book, which I assume picks up immediately where this one ends, will be fascinating too.  However, while the politics and world are pretty interesting, the people just aren’t compelling enough for me to push through and read more.
Email ThisBlogThis!Share to TwitterShare to FacebookShare to Pinterest
Posted by Jessica Strider at 16:08