Not a Review: The Broken Hearted by Amelia Kahaney

Not a Review looks at books I got a good way through before giving up on them. I’ll explain why I read so much and why I didn’t finish.  These are - by their nature - going to be predominately negative reviews.  They’ll also contain some amount of spoilers (though I’ll try not to give anything major away without a warning).
———————————— 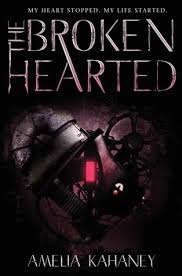 For Parents: off page sex, fair amount of violence

Anthem Fleet is from the good side of town and the daughter of a wealthy family.  But her life isn’t perfect.  She’s not sure she wants to go as far with her boyfriend as he’s been pushing lately and her mother hasn’t recovered from the death of her older sister, for whom she was born as a replacement.  Then she meets a guy at a dance from the wrong side of town and suddenly life’s amazing as she ditches ballet to see her new beau.  Until everything goes horribly horribly wrong.  Now she’s got a clockwork heart and a bounty to pay.

I really liked Anthem.  She’s a bit naive for a 17 year old, but you’re told she’s lived a somewhat sheltered life.  She’s got some regular school girl problems of wanting to fit in and be popular, not being sure about her relationship and feeling pressured to have sex, family troubles, etc.  She’s taken ballet for years and it’s a central part of her life.

I’ll admit I thought the metal heart on the cover of the book was meant to be a euphemism, so I was surprised when she actually undergoes surgery and comes out with an actual clockwork heart.

I liked how intelligently her parents respond to the bounty request, even though they seem to drop the ball a lot with other parenting concerns (especially after she disappears).

For some reason the book irritated me.  In large part this was because I could see the glaring twist coming, which kept being pushed back and pushed back until I wanted to throw the book and say ‘get to it already so you can subvert it somehow’.  I ended up skimming the majority of the book to see what happened and find out when the twist was finally revealed, and it was very late in the game.  So late there was no time for any subversion.

It also kind of annoyed me that Anthem seemed to go from guy to guy.  She leaves her boyfriend for the new guy, then after the twist is revealed immediately realizes she likes another guy.  Considering how badly her previous crushes were I felt she should take some time to consider the sort of guy she actually wants (as even the guy at the end had some major red flags).

I was also shocked at how quickly things went with the second guy, and how little she considered the potential consequences (nor did she consider how convenient the timing of everything was).  I know teens feel things deeply, but she falls fast and hard and goes to extremes for him when things go bad.

I suspect teens who may not be as jaded and aware of certain tropes will really enjoy this book.  Anthem is a determined woman who takes matters into her own hands and actually achieves quite a lot.  The heart twist was interesting and there are some good fight scenes.  But for several reasons it wasn’t a good choice for me.
Email ThisBlogThis!Share to TwitterShare to FacebookShare to Pinterest
Posted by Jessica Strider at 10:18

Labels: Amelia Kahaney, not a review, Science Fiction, The Broken Hearted, YA Fiction