Book Review: The Long Way to a Small, Angry Planet by Becky Chambers 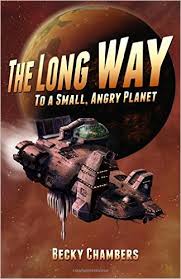 The Wayfarer is a ship that punches tunnels through space, connecting major hubs so other ships can travel between them faster.  When they’re offered the chance to tunnel to a new area, they say yes, even though it means travelling over a year to the entry point in space that isn’t quite friendly.

This is a space opera that focuses on the crew and the world they inhabit by way of a simplistic plot.  The crew encounter a number of problems on the mission, some personal, some interpersonal, and some brought on through outside forces.

I found the crew a lot of fun.  You get to know some of them and their foibles a lot more than others.  Corbin, for example, is introduced as a jerk and a loner and then pretty much ignored until a crisis focused on him arises.  Other characters get a lot of page time, like Kizzy, the mechanic, and Sissix, one of the alien species on board.  Having said that, I never really connected with any of them, and so never felt particularly strong emotions during their crises.

Where the book really shines is the world-building.  The alien races are brilliantly done, with unique languages, cultures, dietary preferences, gestures, sexualities and more.  There are minor info dumps through conversation explaining some of the races’ habits, but they’re integrated well and feel mostly natural.  You’re given enough information to understand the differences between races, and how they interact, without being bogged down in details.

If you’re looking for action and adventure you won’t find it here.  If you’re looking for a fun, interspecies crew and learning about a new world this is a great book.  The climax is exciting and there’s a good denouement that wraps things up well.
Email ThisBlogThis!Share to TwitterShare to FacebookShare to Pinterest
Posted by Jessica Strider at 09:20