Book Review: The World Inside by Robert Silverberg 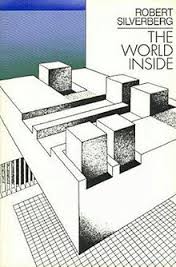 Cons: if you’re prudish you won’t like this book

Centuries in the future the human population has increased dramatically.  Most humans live in 1000 story towers separated into cities with their own schools, hospitals, etc.  Fed by communes outside the towers that urban dwellers will never see as they live their lives fully contained within their buildings.

This book starts with the premise that humans have moved into towers, foregoing privacy for a sexually liberal society and then shows what life is like for a handful of those inhabitants.  It’s a fascinating look at a certain kind of utopian society - and how unhappy many of its inhabitants are under their veneer of acceptance.

The stories vary in terms of interest, though each shows a different aspect of life.  The first involves a lot of exposition as a urbmon dweller explains the tower lifestyle to a visiter from Venus, where the lifestyle is quite different.  Another story shows a young woman’s terror over the prospect of being forced to move to a new tower.  Most of the stories are from the point of view of the higher middle class, though there are glimpses of how the lower, physical workers, and higher, government workers live.

Like many utopian/dystopian books there’s a huge emphasis on population and sex in this book.  There’s a brief contrast in one of the stories between how the people in the towers encourage having children while those of the communes must keep their populations in check.  While the free sexual mores are meant to reduce conflict, jealousies still arise, though not the way you might expect.  There’s a LOT of sex going on in this book.  It’s not graphic and is there to make several points, but consider yourself warned.

I’d expected the book to end with the departure of the Venusian visitor so I was a little surprised when a different character got a second story.  The story did wrap things up well though, touching - however briefly - on the other viewpoint characters.

This is a pretty interesting book.  There’s no plot but the world and characters are quite interesting and will keep you turning pages.  I did find one story, about a musician, a little boring, but the others were quite fascinating.  I’d put it with Ira Levin’s This Perfect Day in terms of dystopian worlds that might not be so bad to live in.
Email ThisBlogThis!Share to TwitterShare to FacebookShare to Pinterest
Posted by Jessica Strider at 10:56