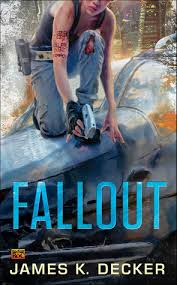 Though months have passed since the events that took place in Shiliuyuan station, Sam Shao is still haunted by what she saw there and what she knows Sillith’s virus is doing to the people of her city.  She wants to expose the truth of the alien haan, what they really look like and have been doing, and so has teamed up with some other dissidents to help expose the aliens’ true form.  But there are a lot of new problems: Alexei is enamoured with the new Gonzo religion that worships the haan, there are hundreds of missing people, and some of her allies want to take their protests to a new, violent level.

The Burn Zone ended with several revelations that deeply affect Sam.  This book starts with her dealing with the fall out of what happened, even though some time has passed.

She’s a great protagonist.  She’s been through some horrible stuff and is quite tough because of it.  That does make it difficult for her to progress in her relationships.  She’s kept Vamp at a distance and her relationship with Alexei is combative, despite her love for her adopted brother.  She’s dealing with a lot and so ignores some important clues that those around her need help and attention, which causes her problems as the action progresses.

The world is fully realized.  It’s easy to picture the streets of Hangfei as Sam goes from place to place.  There’s variety in the different neighbourhoods and a sense of history.

While you don’t learn much new about the haan, they continue to be mysterious.  And the new haanyong - humans who have been ‘evolved’ into haan like creatures - are pretty scary.

The plot is really complex, though Sam does do a lot of running around to keep things moving.  There’s a ton of action, though I was surprised at how many dangerous situations she walked away from without injury.  I was also surprised by how naive she was about how people would react to seeing the true face of the haan.

While I predicted one aspect of the ending, several other things surprised me and I was left… unsure how I felt about Sam’s reaction to the various revelations.

It’s an entertaining book that will keep you turning pages.
Email ThisBlogThis!Share to TwitterShare to FacebookShare to Pinterest
Posted by Jessica Strider at 12:16