This is the second half of the books I received from publishers this month.


Seriously Wicked by Tina Connolly - This is a YA novel from the author of the Ironskin series (I read the first two, Ironskin and Copperhead and loved them). 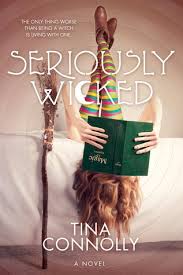 Camellia's adopted mother wants Cam to grow up to be just like her. Problem is, Mom's a seriously wicked witch.

Cam's used to stopping the witch's crazy schemes for world domination. But when the witch summons a demon, he gets loose--and into Devon, the cute new boy at school.

Suddenly Cam's got bigger problems than passing Algebra. Her friends are getting zombiefied. Their dragon is tired of hiding in the RV garage. For being a shy boy-band boy, Devon is sure kissing a bunch of girls. And a phoenix hidden in the school is going to explode on the night of the Halloween Dance.

To stop the demon before he destroys Devon's soul, Cam might have to try a spell of her own. But if she's willing to work spells like the witch...will that mean she's wicked too?

The Hanged Man by P. N. Elrod - The only book I've read by Elrod is I, Strahd: Memoirs of a Vampire (which, I believe was also the only Revenloft novel I read).  I vaguely remember enjoying it so I'm not sure why I didn't read anything else by her (I say 'vaguely' because I read it in my early teens and a lot of time has passed since then).  I find the plot of The Hanged Man so intriguing that it bumped its way up the pile to be my next read. 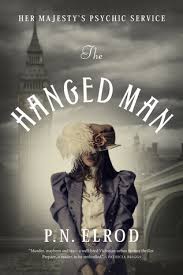 On a freezing Christmas Eve in 1879, a forensic psychic reader is summoned from her Baker Street lodgings to the scene of a questionable death. Alexandrina Victoria Pendlebury (named after her godmother, the current Queen of England) is adamant that the death in question is a magically compromised murder and not a suicide, as the police had assumed, after the shocking revelation contained by the body in question, Alex must put her personal loss aside to uncover the deeper issues at stake, before more bodies turn up.

Turning to some choice allies--the handsome, prescient Lieutenant Brooks, the brilliant, enigmatic Lord Desmond, and her rapscallion cousin James--Alex will have to marshal all of her magical and mental acumen to save Queen and Country from a shadowy threat. Our singular heroine is caught up in this rousing gaslamp adventure of cloaked assassins, meddlesome family, and dark magic.

The Machine Awakes by Adam Christopher - This is the follow-up to last year's The Burning Dark, one of the books I wanted to read last year but didn't get to. 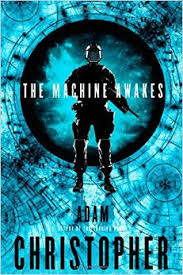 In the decades since the human race first made contact with the Spiders--a machine race capable of tearing planets apart--the two groups have fought over interstellar territory. But the war has not been going well for humankind, and with the failure of the Fleet Admiral's secret plan in the Shadow system, the commander is overthrown by a group of hardliners determined to get the war back on track.

When the deposed Fleet Admiral is assassinated, Special Agent Von Kodiak suspects the new guard is eliminating the old. But when the Admiral's replacement is likewise murdered, all bets are off as Kodiak discovers the prime suspect is one of the Fleet's own, a psi-marine and decorated hero--a hero killed in action, months ago, at the same time his twin sister vanished from the Fleet Academy, where she was training to join her brother on the front.

As Kodiak investigates, he uncovers a conspiracy that stretches from the slums of Salt City to the floating gas mines of Jupiter. There, deep in the roiling clouds of the planet, the Jovian Mining Corporation is hiding something, a secret that will tear the Fleet apart and that the Morning Star, a group of militarized pilgrims searching for their lost god, is determined to uncover.

But there is something else hiding in Jovian system. Something insidious and intelligent, machine-like and hungry.

The Spiders are near.

Of Noble Family by Mary Robinette Kowal (finished copy - I reviewed the book from an advance reader copy I received) -  This book marks the ending of a wonderful series that asks 'what would Jane Austen's Regency period look like if there was a womanly magic art?'  The series begins with Shades of Milk and Honey. 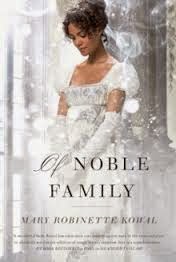 Where by Kit Reed - This sounds like an interesting mystery/speculative fiction book. In a coastal town on the Outer Carolina Banks, David Ribault and Merrill Poulnot are trying to revive their stale relationship and commit to marriage, and a slick developer claiming to be related to a historic town hero, Rawson Steele, has come to town and is buying up property. Steele makes a romantic advance on Merrill and an unusual 5 a.m appointment outside of town with David. But Steele is a no-show, and at the time of the appointment everyone in the town disappears, removed entirely from our space and time to a featureless isolated village--including Merrill and her young son. David searches desperately but all seems lost for Steele is in the other village with Merrill.

The Architect of Aeons by John C. Wright - I generally try not to let politics interfere with my reading preferences, but there are a few exceptions and Wright is one of them.  He's too outspoken with his beliefs to ignore, and his beliefs are some I cannot support, even if the books themselves don't follow them (and I don't know if they do or not).  But if you're interested in space opera, this is the fourth book in the Count to the Eschaton Sequence, which began with Count to a Trillion. 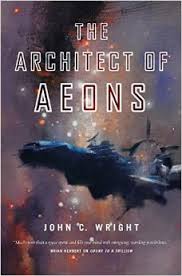 The epic and mind-blowing finale to this visionary space opera series surpasses all expectation: Menelaus Montrose, having forged an uneasy alliance with his immortal adversary, Ximen del Azarchel, maps a future on a scale beyond anything previously imagined. No longer concerned with the course of history across mere millennia, Montrose and del Azarchel have become the architects of aeons, bringing forth minds the size of planets as they steer the bizarre intellectual descendants of an extinct humanity.

Ever driving their labors and their enmity is the hope of reunion with their shared lost love, the posthuman Rania, whose eventual return is by no means assured, but who may unravel everything these eternal rivals have sought to achieve.