Book Review: Footsteps in the Sky by Greg Keyes 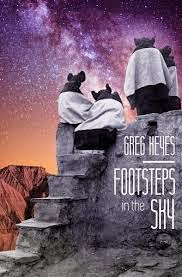 Descendants of the Hopitu-Shinumu Native Americans colonized Fifth World agreeing to terraform the planet for the Vilmir Foundation - what they call the Reed - in return for ownership of the world when it was fully habitable.  But a rift has formed between those who live on the coast, trading with the Reed for technology and renouncing the backward ways of their forefathers, and those who live on the pueblos, the Traditionalists, keepers of the old ways and old religion.  When three alien spaceships appear in orbit the coastal Tech Society believe this new technology could help them throw off the yoke of the Reed, assuming they can control it.  Meanwhile, a traitor alerts the Reed to the presence of the ships, prompting them to send a group of colonial peacekeepers to secure the ships for themselves - or destroy them should they prove hostile.

Unknown to the colonist these are the alien ships that performed the original terraforming on the planet that made it possible for humans to eventually inhabit it, but the ships’ very long lives have made their AIs unstable and they’re unsure if allowing the invaders to inhabit this world is something their Makers would have approved.  In an attempt to answer this question, one of the ships creates a clone to meet the inhabitants and see if they deserve life, of if the ships should wipe the planet clean.

The background for the plot is fairly complicated - and takes a few chapters to set up - after which the story itself is quite straightforward.  I loved the world-building.  The author’s father worked on a Navajo reservation when Keyes was young, so he learned a lot of the stories and beliefs that are recounted in this novel.  I found the stories of the Kuchina, the origin of the Hopi and the prophecy that sent their ancestors to this planet in search of a new home really interesting.  I also loved how SandGreyGirl could both question and in some ways blindly believe the teachings of her youth.  The complexity of the emotions examined by her and Tuchvala, concerning beliefs and how the world changes you, were believable.  I also liked how inheritance passed through the female line, and how that changed gender dynamics.  It was interesting to read how SandGreyGirl sometimes took female lovers because it reduced the chance that her partner was after her land and the pressures of marriage that relationships with men brought up.

I appreciated the variety of characters, some likeable and other less so.  Everyone felt real, with understandable rationalizations for what they were doing, even the various antagonists.  The only hesitation I had here was with how Sand and Tuchvala relate to each other at the end of the book.  I’ll mention more about that in the spoiler section.

You don’t learn much about the Makers, the ones who built the ships, but what you do learn is quite interesting.

There are hard SF elements, though I don’t know if all the physics were accurate.  I appreciated that space travel took years and that time passed differently for those planet side.

I’d have loved a few historical notes in an afterward explaining what, if any, of the things Keyes attributes to the Hopi people were made up for the book (beyond the prophecy).

It was an interesting book that brought out some questions about the nature of belief and had a fair bit of action.

Ok, I understand that Tuchvala is not in fact Sand’s mother.  But she IS a genetic copy of Sand’s mother, making their relationship incestuous.  Perhaps this is mitigated by the fact that - since they’re both women - they can’t have children together (without outside aid), but I still found the idea of the attraction - from Sand’s point of view at least - really creepy.  You could argue that Tuchvala, not having raised Sand, wouldn’t think of her as a daughter (her dreams notwithstanding), but Sand would still know this is her mother’s clone - making her sexual interest in Tuchvala disturbing to me.  And while the ending is left open, the book hints at the relationship throughout the story enough that it’s hard to read a different outcome from what is stated.
Email ThisBlogThis!Share to TwitterShare to FacebookShare to Pinterest
Posted by Jessica Strider at 11:06