Book Review: Stone in the Sky by Cecil Castellucci 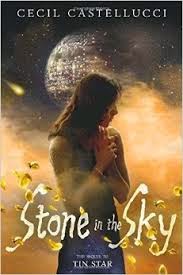 Cons: not much depth, Tula doesn’t explain herself well which leads to some of her problems, faulty economics

A year has passed since Tula Bane changed her plans and sent both Reza and Caleb to the outer rim.  Now Reza is back, angry at how things went and changed by the horrors he faced there.  He’s discovered a secret source of wealth on the planet Quint, the planet that the space station Yertina Feray orbits.  And wealth has always attracted the man who ruined Tula’s life and sent numerous colonists to their deaths, Brother Blue.  But bringing down Brother Blue isn’t easy when the fictional colonies he founded are the only things keeping Earth safe as a Minor Race in the Imperium.

As with the first book, Tin Star, I really like Tula as a character.  She’s resourceful and full of optimism.  It was cool seeing her in the thick of things, constantly learning more about the world and trying to make the best deals.  I also liked how she utilizes what she’s learned of the various races while travelling.

Having said that, things work out surprisingly well for her.  Not to say that she doesn’t suffer hardships or that she doesn’t work hard at various times to make things work, but she’s helped by strangers and friends alike in unexpected and sometimes unlikely ways, especially when she starts travelling.

She was also very closed mouthed about her reasons for things, and there were definitely times when she owed certain people explanations for her actions but didn’t give satisfactory ones, yet wondered why those people would find it hard to trust and/or like her.  For example, I was left confused at the beginning of the book by why she’d decided to send Reza to the outer rim when he specifically stated he wanted to go back to Earth (and as an Imperium officer should have been allowed back in, unlike Wanderers and colonists).  Even when he confronts her about this her reasoning is lacking.  She’s also not very sympathetic to what he underwent out there, obviously assuming his experiences were similar to her first months on the Yertina Feray.  But we later learn that things for him and Caleb were a lot worse than what she faced, yet she never properly apologizes for what she put them through.

Similarly, she wants the human Wanderers to listen to her and avoid the colonies but doesn’t tell them what she knows about the colonies or Brother Blue.  She simply tells them to not listen to other humans, including herself.  Then she’s surprised when they don’t seem to listen to her advice.  Telling them what was really going on would have left them better prepared for what was happening than vague warnings to not trust people.

There’s a decent amount of politics going on, but Tula isn’t in a position to learn what’s happening.  It makes her attempts to disrupt things both difficult and dangerous, as she isn’t always aware of the effect she’s having (which later causes her problems).

The economics surrounding the alin didn’t make much sense.  At the beginning of the book Tula only accepts currency chits because she understands that the price of alin will fluctuate and decrease.  But as time goes on there’s the implication that the more people who grow and harvest alin the more valuable it will become.  In real life if you flood the market with a product its price drops.  I mention more about this in the spoiler section below.

I liked the side characters, though you don’t see as much of them as I’d have liked.  I loved the introduction of Elizabeth and seeing a little of how the Wanderers live.

I’ve been reading a lot of hard SF lately, so I kept questioning the timeline in the book regarding how quickly ships travelled and how everyone seemed to be aging as if they were on planets, despite several people spending time on spaceships.  Be aware that this isn’t hard SF and shelve those questions before you start the book or it’ll really bother you.

I had a lot of minor complaints with this book but they didn’t stop me from finding the book on the whole entertaining.  The book is never dull with a variety of locations and problems for Tula to face.  It’s got some great characters and alien lifeforms, and the ending is very satisfying.

With regards to the economics, it doesn’t make sense for Reza to tell anyone he’s found alin on the planet.  As long as he’s got a ready source of the stuff, he can sell it for high value.  But the more people who successfully grow it, the less value the plants will have.  It made the community atmosphere on the planet a little strange since these are people competing with one another for wealth, not colonists hoping to make a home on the planet (with the exception of Tula’s group).  And when the planet got razed I would have thought the plants would be even more valuable again for those who stuck it out.  Yes, the amount of arable land decreased, but I still assumed the eventual crop would be worth it for the true prospectors.
Email ThisBlogThis!Share to TwitterShare to FacebookShare to Pinterest
Posted by Jessica Strider at 18:21