This is the first batch of books I got from publishers (and one author) this month.  My thanks, as always, to them for sending me books.  I can't read everything, but sometimes I'd really, really like to.

Alice in No-Man's Land by James Knapp - I've already read and reviewed this futuristic/post-apocalyptic novel.  I really enjoyed it, much as I've enjoyed the other books Knapp has written (both under his own name and his pseudonym, James Decker).  His Revivors books, starting with State of Decay (my review), are brilliant.  I also did an interview with him several years ago. 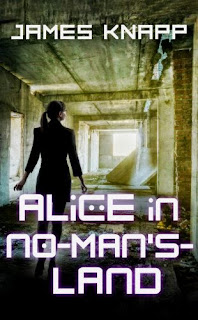 Alice Walshe has led a very charmed life, until now.

Twenty years after a pandemic crippled the country things are finally back on track and her father, a major player at real estate giant Cerulean Holdings, has made billions renewing the pockets of urban decay that were left behind. As his protégé she has accompanied him to one such area named Ypsilanti Bloc, a particularly valuable site due to its proximity to a major thriving city. When their airship is attacked by Ypsilanti's biggest militia, however, Alice and her brother Cody only barely escape and end up as the sole survivors of the crash.

Alice emerges from the drop ship to find herself trapped in the very Bloc that her father was meant to re-purpose - a ruined city that militias, gangs, and even cannibals now call home. She is discovered by a pair of teens who have tracked the wreck hoping to scavenge anything useful, and with few options open to her she employs their help to find her brother and get home. Things grow more complicated, however, when she realizes that the attack may not have been random, and that Cerulean’s renewal project may not be as benign as she had been brought up to believe.


The Affinities by Robert Charles Wilson - This is high on my TBR list, as it deals with social media and how things can be taken too far when people try to segregate themselves with others who only share their views and interests. 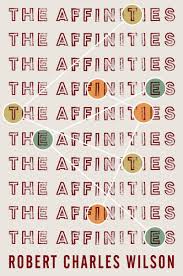 In our rapidly-changing world of "social media", everyday people are more and more able to sort themselves into social groups based on finer and finer criteria. In the near future of Robert Charles Wilson's The Affinities, this process is supercharged by new analytic technologies--genetic, brain-mapping, behavioral. To join one of the twenty-two Affinities is to change one's life. It's like family, and more than family. Your fellow members aren't just like you, and they aren't just people who are likely to like you. They're also the people with whom you can best cooperate in all areas of life--creative, interpersonal, even financial.

At loose ends both professional and personal, young Adam Fisk takes the suite of tests to see if he qualifies for any of the Affinities, and finds that he's a match for one of the largest, the one called Tau. It's utopian--at first. Problems in all areas of his life begin to simply sort themselves out, as he becomes part of a global network of people dedicated to helping one another--to helping him.

But as the differing Affinities put their new powers to the test, they begin to rapidly chip away at the power of governments, of global corporations, of all the institutions of the old world. Then, with dreadful inevitability, the different Affinities begin to go to war--with one another.

What happens next will change Adam, and his world, forever.


Picturing the Apocalypse: The Book of Revelation in the Arts over Two Millennia by Natasha and Anthony O'Hear - Revelations was my favourite book in the Bible back when I attended church. Depictions of the end of days has been one of my fascinations ever since.  I'm very curious to see what new insights these authors bring to the table.  The book is out July 25th. 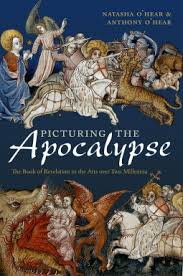 The book of Revelation has been a source of continual fascination for nearly two thousand years. Concepts such as the Lamb of God, the Four Horsemen, the Seventh Seal, the Beasts and Antichrist, the Whore of Babylon, Armageddon, the Millennium, the Last Judgement, the New Jerusalem, and the ubiquitous angels of the Apocalypse have captured the popular imagination. One can hardly open a newspaper or click on a news site without reading about impending financial or climate-change Armageddon, while the concept of the Four Horsemen pervades popular music, gaming, and satire. Yet few people know much about either the basic meaning or original context of these concepts or the multiplicity of different ways in which they have been interpreted by visual artists in particular. The visual history of this most widely illustrated of all the biblical books deserves greater attention.

This book fills these gaps in a striking and original way by means of ten concise thematic chapters which explain the origins of these concepts from the book of Revelation in an accessible way. These explanations are augmented and developed via a carefully selected sample of the ways in which the concepts have been treated by artists through the centuries. The 120 visual examples are drawn from a wide range of time periods and media including the ninth-century Trier Apocalypse, thirteenth-century Anglo-Norman Apocalypse Manuscripts such as the Lambeth and Trinity Apocalypses, the fourteenth-century Angers Apocalypse Tapestry, fifteenth-century Apocalypse altarpieces by Van Eyck and Memling, Dürer and Cranach's sixteenth-century Apocalypse woodcuts, and more recently a range of works by William Blake, J.M.W. Turner, Max Beckmann, as well as film posters and film stills, cartoons, and children's book illustrations. The final chapter demonstrates the continuing resonance of all the themes in contemporary religious, political, and popular thinking, while throughout the book a contrast will be drawn between those readers of Revelation who have seen it in terms of earthly revolutions in the here and now, and those who have adopted a more spiritual, other-worldly approach.

Window Wall by Melanie Rawn - Rawn is another established author whose books I've always wanted to read but have never found the time for.  This is the fourth book in her Glass Thorns series, which started with Touchstone. 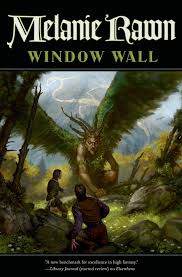 For nearly two years, Cade has been rejecting his Fae gift, his prescient Elsewhens--simply refusing to see or experience them. But the strain is driving a wedge between him and his theater troupe, Touchstone, and making him erratic on stage and off. It takes his best friend Mieka to bully Cade into accepting the visions again. But when Cade finally looks into the possible futures, he sees a royal castle blowing up, though his vision does not tell him who is responsible. But he knows that if it is in his visions, he can take action to stop it from happening. And when he finally discovers the truth, he takes the knowledge to the only man in the Kingdom who would believe him: his deadly enemy the Archduke.


The Unremembered: Author's Definitive Edition by Peter Orullian - This is another author I interviewed, and now he's rereleasing The Unremembered with what I understand are significant changes that reflect where book two in the series, Trial of Intentions, went. 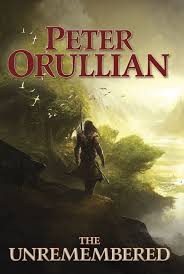 Peter Orullian's epic fantasy debut The Unremembered has been critically acclaimed, earning starred reviews and glowing praise. But now it gets even better. In anticipation of the second volume in Orullian's epic series, and for one of the few times in our publishing history, we at Tor are choosing to relaunch a title with an author's definitive edition.

In addition to stunning updates to the original text, we're also including an exclusive short story set in the world of Vault of Heaven as well as a sneak preview of the sequel, Trial of Intentions, and a glossary to the universe.

The gods who created this world have abandoned it. In their mercy however, they sealed the rogue god-and the monstrous creatures he created to plague mortal kind-in the vast and inhospitable wasteland of the Bourne. The magical Veil that protected humankind for millennia has become weak and creatures of nightmare have now come through. Those who stand against evil know that only drastic measures will prevent a devastating invasion.

Tahn Junell is a hunter who's unaware of the dark forces that imperil his world, in much the same way his youth is lost to memory. But an imperious man who wears the sigil of the feared Order of Sheason and a beautiful woman of the legendary Far have shared with Tahn the danger. They've asked him, his sister, and his friends to embark with them on a journey that will change their lives . . . and the world . . . forever. And in the process, he'll remember . . .