California Coldblood Books is an imprint of Rare Bird Books and specializes in science fiction, fantasy, and speculative fiction.  They have three books coming out this year, the first of which is now available.

The Odds by Robert J. Peterson 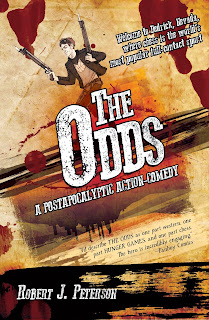 It’s been centuries since Deadblast deleted most of what we knew. All that’s left are a smattering of subterranean cities run by a ruthless cadre of bookies. We call ‘em the Odds. It’s a rough world. If you’re not freezing your ass off at night, then the sun cooks you during the day. If you’re too slow on the draw, a dreen’ll getcha. What’s a dreen?
You don’t want to know.

Here’s the deal: The man they call the redhead is back in town. He’s returned to the city of Dedrick, deep in debt and deathly ill. Wait, who’s the redhead? Well, lemme tell you—he ain’t too quick on the uptake, but his heart’s big enough to make up for it. Y’see, he’s on the outs from his family, and he’s dead-set on doing right by ‘em before he clocks out. His last hope is to win a deadly battle royale based on the rules of chess. Here's how it works:

Two guys play a game of chess. Every time they capture a piece, two real-life warriors gotta fight to the death. The attacking piece announces their move in advance. The more powerful your piece, the less notice you have to give. The mighty queen, she can strike instantly, with just about any armament imaginable, but a lowly pawn’s got to give 36 hours notice and fight only with melee weapons. The arena is all of Dedrick. Last man standing wins the square.

But what the redhead doesn’t know is someone’s gamed the tournament to pit him against an old friend who’s now a bitter enemy. Now he’s got to make all the right moves to save his family—and beat the Odds.


When the Stars Fade by Adam L. Korenman 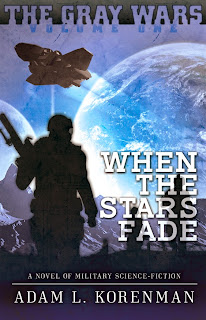 In distant future, humanity is recovering from a bloody civil war. Pilots CAMERON DAVIS and GEORGE LOCKLEAR, reservists with Sector Patrol, prepare for a long weekend off. That vacation is permanently cancelled when two alien armadas—the BOXTI and NANGOLANI—arrive near Earth. Though humanity wins the battle, the war quickly turns one-sided. One of Earth’s colonies is rendered uninhabitable. George dies saving his friend, and Cameron is sucked through a wormhole and disappears.

Far away on the moon Kronos, JOSH RANTZ competes in a huge Army competition. Despite most of his unit falling to the enemy, Josh and his squad continue to win larger and larger victories. They are oblivious to the goings on of the universe, isolated on purpose by the war-game’s designer, Doctor MARKOV. When the exercise ends, Josh notices a meteor striking down nearby. He finds an injured Cameron, somehow transported across the stars to the military base. Moments later, the BOXTI arrive and invade. Outnumbered and outgunned, Josh and the soldiers on Kronos rally and push back the BOXTI horde. Summoned by their masters, the BOXTI leave the stunned humans behind.

With painful lessons learned, humanity prepares for the next battle, knowing full well that it may be their last.

The Demon Within by Beth Woodward 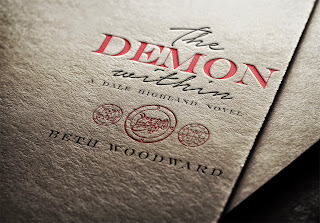 Dale Highland is a murderer. But she doesn’t want to be.


For 10 years, she’s been struck by violent blackouts she calls Rages. But this time, she’s killed an innocent man, and the knowledge tears her up inside.

Months later, a run-in with a mysterious, alluring man named John leads Dale to discover that she’s half demon. Dale and John team up to find Dale’s long-missing mother, a legend in the demon world and the only person who might be able to help Dale control her Rages. Their quest throws them into a collision course with the Thrones, a group of angels determined to eradicate demons from Earth. The world of angels and demons is darker, and more dangerous, than Dale understands. In order to get the answers she seeks, Dale will have to risk not only her life…but her soul.

Out winter 2015.
Email ThisBlogThis!Share to TwitterShare to FacebookShare to Pinterest
Posted by Jessica Strider at 09:40