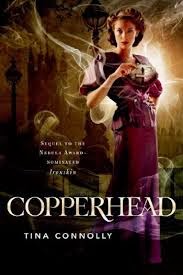 Cons: Alastair’s mistreatment of Helen is more told than shown

Helen Huntingdon’s husband is part of Copperhead, an organization that aims to rid the city of the fae - and the dwarvven.  Under his direction she replaced her normal face with a fae one, an act that now leaves her in peril of being overtaken by the fae and having her own existence wiped out.  She’s not alone, almost 100 other influential women in the city have had the same operation.

Helen brings her sister Jane to a Copperhead meeting in order to remove the fae mask of the host’s wife, but when the host turns on their new weapon against the fae, something goes horribly wrong.  The wife is left in a fae trance while Jane, accused of murdering the woman, has disappeared.  Helen must convince the rest of the 100 fae faced women to have the operation to return their original faces while she searches for her missing sister, because it sounds like the fae are gearing up for another attack.

Helen is a great character.  While Jane, the protagonist of the first book, and her older sister, is direct and often tactless with her sense of right and wrong, Helen has learned to manipulate the people around her into thinking she’s a bit empty-headed and have them do things for her when she smiles and flirts.  She feels guilty that she wasn’t brave enough to join the fae war like Jane, and resentful that Jane left her - at 13 - to watch their mother die of a slow illness afterwards.  Helen doesn’t want to responsibility that’s left with her when Jane disappears.  She wants to be shallow, discussing fashion with other socialite women, dancing, and flirting.  She wants to find Jane so she can hand over the fate of the 100.  But when push comes to shove - again and again and again - she knuckles down and does when she has to.  Indeed, as the book progresses you discover how much of her flirtatious attitude masks insecurity and how capable she really is when she trusts herself.  We learn what she actually did after the war - how she helped and what decisions she made that trapped her in the present, with a husband who isn’t who she thought he was.  It’s fascinating seeing the different sides of her, and watching her decide who she wants to be moving forward.  It’s a story about seeing yourself as you truly are and accepting the good and bad in you.  It’s a story about growth.

The Copperhead plot was pretty interesting, as was the mystery of what happened to Jane and the danger facing the city.  There’s a touch of romance that develops organically from the story.  In addition to Helen there are a number of other interesting women who play a large part of the story.  It’s cool to see female friendships and interactions in a fantasy setting.

I felt that Helen and Alastair’s relationship wasn’t as well defined in the book as it could have been.  There’s more telling than showing to indicate that their relationship is bad.  Early on he takes her mask - the only thing that keeps her safe from being taken over by the fae when outside.  He sees it as a way of protecting her.  She sees it as a way of controlling her.  Without other interactions it’s hard to know if she is being unreasonably restricted by him (I’d argue she isn’t considering how easy it is for her to sneak out).  Only later in the book do we see his darker side, but even then, some of the revelations about him at the climax still came as something of a shock to me.

As much as I enjoyed Ironskin I have to admit I liked Copperhead more.  Perhaps it was because the story was more original, perhaps it was because Helen was such a delightful character to get to know.  I’m really enjoying this series and look forward to finishing it off in Silverblind.
Email ThisBlogThis!Share to TwitterShare to FacebookShare to Pinterest
Posted by Jessica Strider at 07:29