Many thanks to the amazing publishers who send me books for review.  My reading dropped off a lot in December, due to the holidays, but I'm hoping to catch up on several books in January.

Willful Child by Steven Erikson - I'm really looking forward to this book.  I grew up on the original Star Trek (in reruns), and this parody looks like a lot of fun. 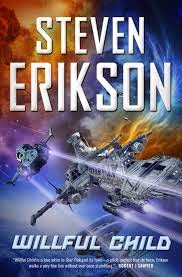 These are the voyages of the starship A.S.F. Willful Child. Its ongoing mission: to seek out strange new worlds on which to plant the Terran flag, to subjugate and if necessary obliterate new life-forms, to boldly blow the...

And so we join the not-terribly-bright but exceedingly cock-sure Captain Hadrian Sawback and his motley crew on board the Starship Willful Child for a series of devil-may-care, near-calamitous and downright chaotic adventures through ‘the infinite vastness of interstellar space.’

The New York Times bestselling author of the acclaimed Malazan Book of the Fallen sequence has taken his lifelong passion for Star Trek and transformed it into a smart, inventive, and hugely entertaining spoof on the whole mankind-exploring-space-for-the-good-of-all-species-but-trashing-stuff-with-a-lot-of-high-tech-gadgets-along-the-way, overblown adventure. The result is an SF novel that deftly parodies the genre while also paying fond homage to it.


Wild Cards: Lowball Edited by George Martin and Melinda Snodgrass - This is a short story series I've been meaning to read for a while.  I love superhero fiction. 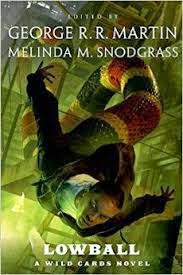 Decades after an alien virus changed the course of history, the surviving population of Manhattan still struggles to understand the new world left in its wake. Natural humans share the rough city with those given extraordinary—and sometimes terrifying—traits. While most manage to coexist in an uneasy peace, not everyone is willing to adapt. Down in the seedy underbelly of Jokertown, residents are going missing. The authorities are unwilling to investigate, except for a fresh lieutenant looking to prove himself and a collection of unlikely jokers forced to take matters into their own hands—or tentacles. The deeper into the kidnapping case these misfits and miscreants get, the higher the stakes are raised.

Perfect for old fans and new readers alike, Lowball delves deeper into the world of aces, jokers, and the hard-boiled men and women of the Fort Freak police precinct in a pulpy, page-turning novel of superheroics and mystery.


Hawk by Steven Brust - I haven't read any of the Vlad Taltos books, but this one sound really interesting. 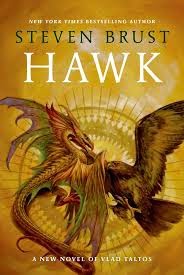 Years ago, Vlad Taltos came from the East, to make his way as a human amidst the impossibly tall, fantastically long-lived natives of the Dragaeran Empire. He joined the Jhereg, the Dragaeran House (of which there are seventeen) that handles the Empire's vices: gambling, rackets, organized crime. He became a professional assassin. He was good at it.

But that was then, before Vlad and the Jhereg became mortal enemies.

For years, Vlad has run from one end of the Empire to the other, avoiding the Jhereg assassins who pursue him. Now, finally, he's back in the imperial capital where his family and friends are. He means to stay there this time. Whatever happens. And whatever it takes.


Myths and Legends: The Knights of the Round Table by Daniel Mersey - I just love these myths and legends books.  They're great primers for specific myths, with lots of awesome pictures and good background information for the stories. 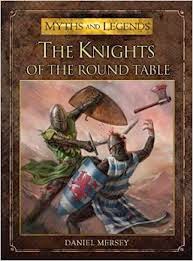 The Knights of the Round Table were the original knights in shining armour, and this book is for anyone who is interested in fantastical tales of bravery or the actual history behind the stories. In medieval Arthurian tradition, Arthur often takes a back seat in the most exciting stories: he appears at the beginning and end of each to set the scene and conclude the tale. The central character is instead one of the Knights of the Round Table, each of whom is confronted with a wide variety of challenges and quests ranging from fighting monstrous creatures and rescuing damsels in distress to coping with courtly love and intrigue. Although Arthur is the most well-known character from these stories his key knights - including Lancelot, Gawain, Perceval, and Tristan - are almost equally well known This volume provides a collection of the most famous and interesting tales of the Knights of the Round Table, including the historical and literary background to the stories.

Email ThisBlogThis!Share to TwitterShare to FacebookShare to Pinterest
Posted by Jessica Strider at 07:30