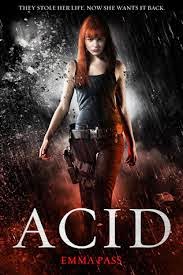 Cons: elements of the ending were problematic

For Parents: kissing, violence, nothing graphic

Seventeen year old Jenna Strong has spent the last 2 years in prison for the murder of her parents, agents of ACID (Agency for Crime Investigation and Defense), because she didn’t like the boy they’d picked to be her LifePartner.  Sprung by a mysterious organization for reasons she doesn’t understand, her life outside quickly goes downhill.

Jenna’s an interesting character in that she’s sympathetic for readers, but apparently quite prickly to people around her in the book.  She’s standoffish and quickly alienates several of the people trying to help her, though in her defense, she’s given little reason to trust the people helping her.  She’s pretty street smart, though she does make some decisions that cause her serious problems.

While I saw a few plot twists coming the book goes in a lot of directions I did not anticipate, making it a fun book to read.

There are minor romantic elements that enhance what’s happening with Jenna without becoming the focus of the story.  And while there is some kissing, there’s no other sexual content.

There’s a variety of violence in the book (which involves some prison scenes, an interrogation, bombing and more) nothing is graphically described.

Part of the ending required Jenna to be an angry teen who doesn’t care that the adults around her know more about what’s happening than she does and are better prepared than she is, just that they’re not doing what she wants, which was kind of annoying.  It also depended on an adult making some very stupid decisions, which I questioned while I was reading.  Having said that, I did like the ultimate resolution.

It’s a quick paced book with some very tense moments.
Email ThisBlogThis!Share to TwitterShare to FacebookShare to Pinterest
Posted by Jessica Strider at 10:30