I know I did a shout-out a few days ago and I'd planned to mention this book as a shout-out next week, but as a copy arrived on my doorstep today I figured I'd bump up that schedule.

We got several boxes of this book at the store yesterday, which surprised me as I hadn't encountered it anywhere other than my 'Upcoming SF/F' list.  Usually if a book's expected to do well there's a lot more pre-publicity for it on the internet.  I discovered (after googling the author) that the book's been optioned for film.  Not bad for a debut.

So, what's the book about? 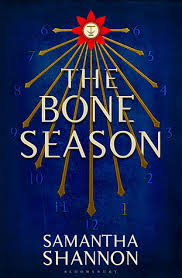 It is the year 2059. Several major world cities are under the control of a security force called Scion. Paige Mahoney works in the criminal underworld of Scion London, part of a secret cell known as the Seven Seals. The work she does is unusual: scouting for information by breaking into others' minds. Paige is a dreamwalker, a rare kind of clairvoyant, and in this world, the voyants commit treason simply by breathing. But when Paige is captured and arrested, she encounters a power more sinister even than Scion. The voyant prison is a separate city--Oxford, erased from the map two centuries ago and now controlled by a powerful, otherworldly race. These creatures, the Rephaim, value the voyants highly--as soldiers in their army. Paige is assigned to a Rephaite keeper, Warden, who will be in charge of her care and training. He is her master. Her natural enemy. But if she wants to regain her freedom, Paige will have to learn something of his mind and his own mysterious motives.


I have to say it sounds pretty interesting.  Her facebook account says this is the first book of a 7 book series, which is an exciting prospect.  If you're interested in learning more about the author you can check out her website, her blog and facebook.

Email ThisBlogThis!Share to TwitterShare to FacebookShare to Pinterest
Posted by Jessica Strider at 14:47