Shout-Out: The Arrivals by Melissa Marr

Here's another genre book I saw while shelving in the general fiction section.  Fantasy with a western slant's becoming more and more popular it seems. 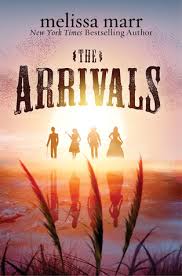 The Wasteland is a world beyond our own. It is a rough and ragged landscape under a two-moon sky, inhabited by monsters and creatures that could almost pass for human. Into this alternate world unwitting people are brought, from both past and present, for reasons none of them know.

Chloe Mattison goes to sleep, drunk and heartbroken, in Washington, D.C., and wakes up in the Wasteland. Chloe is welcomed by Jack and Kitty, brother and sister from a Wild West frontier town. "You're one of us," they tell her, yet neither Jack nor Kitty, nor any of their companions, know why they were chosen.

Two questions loom large in all of their minds: Why are we here? Is there a way out of this corrupt, demon-filled world?
Email ThisBlogThis!Share to TwitterShare to FacebookShare to Pinterest
Posted by Jessica Strider at 16:48