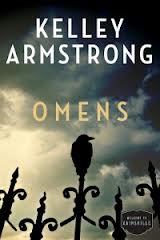 Twenty-four year old socialite Olivia Taylor-Jones's life is turned upside down when she discovers that not only is she adopted, her birth parents are notorious serial killers.  Running to avoid the media and protect her mother and fiancee, Olivia ends up in Cainsville, a small town outside Chicago.  While trying to get by on her own she starts investigating the murder case that put her parents behind bars.  And her superstition about omens seems to be giving her good guidance lately.

There's a lot going on in this novel.  There's Olivia's coming of age, as she's forced from her home and social expectations and allowed to find what she wants out of life.  There's the murder mystery, long gone cold with few leads that haven't been followed by others.  And there's the town, with it's unique mixture of people, many of whom have some connection to Britain's folkloric past - though Olivia's mostly unaware of this and the reader's only given hints.  This book is primarily grounding for the new series.  We're introduced to the main players, including the town itself, with its numerous gargoyles and mysterious happenings.

I loved the plot, that this girl discovers she's the kid of serial killers and how she deals with it.  And she deals with it remarkably well.  Despite the many things she learns, sees and does, she never breaks down.  Which is surprising, because she sees and does some horrific things.  It was strange not seeing her deal with the grief and shock that would have accompanied some of what she does/encounters.  But it certainly set her up as a strong character - much like Ripley from the Alien franchise.  Kick-ass and capable, but not always right.  In many ways she's well complemented by Gabriel Walsh, the lawyer who offers his aid - for a fee - who also displays little emotion.  I liked that the groundwork of a romance between them was set up, but that it's being allowed to develop naturally - assuming that's the direction the author is taking their relationship.

It's a quick, entertaining read and a good set up for what sounds like an interesting series.

Out August 20th.
Email ThisBlogThis!Share to TwitterShare to FacebookShare to Pinterest
Posted by Jessica Strider at 11:55