This is a revised list thanks to the comments I got on the original post.  I went through Chizine Publication's Imaginarium and pulled out the Ontario authors.  I also went through the list of panelists for this year's Ad Astra, a local convention, which has greatly beefed up the list.  So, there are now short fiction and poetry categories, as well as novelists.

A few of the newly added authors I've met/read, so I'm embarrassed that I missed them on my original list.  Having said that, I encountered a lot of authors I've not heard of, which is exciting. :)  And I discovered that Steven Erikson is Canadian, though based in Winnipeg.

I also discovered that Dennis Lee is still writing poetry.  If you're not Canadian you might not have heard of him, but kids of my generation all grew up reading his books of poetry for kids, Alligator Pie and Garbage Delight.  The books have recently come back into print, ready for a new generation.  I'll have to look up some of his adult stuff and see if it's as bizarre and fun as his kids stuff.

I'm sure the list is still incomplete, so if you know any authors missing, please mention them in the comment section.  Oh, and in a few cases I couldn't figure out if they are based in Ontario or not so I apologize for any errors on the list. 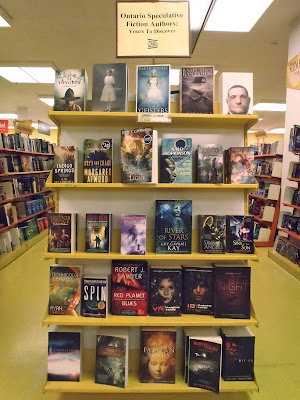 Books On the Display:

Email ThisBlogThis!Share to TwitterShare to FacebookShare to Pinterest
Posted by Jessica Strider at 13:03