I've received several emails lately with promotional trailers for some movies of interest. 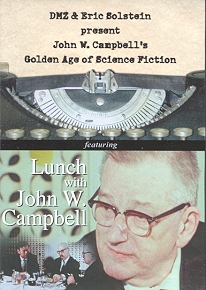 The first is a documentary about John W. Campbell, Jr. by DMZ and Eric Solstein.

Science Fiction erupted into the modern age in 1938 when John W. Campbell, Jr. took over as editor at Astounding Science Fiction magazine. This is the story of one unique man who managed to create our modern vision of the future.


The second video is a kickstarter campaign for a short film called Reality Check.  I'm not keen on their backer rewards but the film sounds interesting.  There's 15 days left to support it.

Here's the premise from their site.

Elion is an insurance agent who time-travels to check the validity of insurance claims. A job known as “The Watcher,” Elion, has one last assignment as a “Watcher,” which if she can solve will lead to a promotion.

The reward?  Elion will gain the ability to take her own time trip and gain information as to the whereabouts of her missing family, and the inner workings of Reality Check. She discovers along the way that corruption begins on a personal level. A decision she makes in the past will change the course of her future forever.

And last but not least, for you horror fans out there, Devil's Pass is a found footage movie coming out Sept 27th.

The real life mystery of the Dyatlov Pass Incident has baffled investigators and researchers for decades, and rumors have attributed their strange deaths to everything from  alien encounters to government conspiracies. Check out the brand new trailer to join a new generation of explorers as they make their way through the infamous Ural Mountains and uncover secrets more shocking than they could have ever imagined.