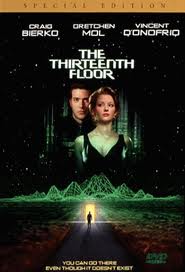 Cons: several other movies have done smiliar things, making it easier to guess the twists towards the end

Three men working on the 13th floor of an office building for the past 6 years have created a virtual replica of 1937, complete with people who don't know they're in a computer simulation.  When the genius behind the idea, Hannon Fuller (Armin Mueller-Stahl), is killed, his subordinate Douglas Hall (Craig Bierko), tries to find out what secret he'd discovered.  Meanwhile Detective McBain (Dennis Haysbert) tries to solve Fuller's murder, making Douglas a suspect and Fuller's previously unmentioned daughter Jane (Gretchen Mol) attempts to shut their company down.

Given the nature of the twists at the end, it's best not to read too much about this film before seeing it.  Other films have done similar things, and their comparisons reveal what is otherwise quite a brilliant revelation.  It's a shame too, as this movie is very smart and excellently plotted.

The inclusion of the 30s virtual reality gives it a noir SF feel.  That atmosphere carries out from the computer world into the stark sets of the present and the grim expression of the protagonist.

The mystery is intriguing even for those who figure out what's going on before the end.

Email ThisBlogThis!Share to TwitterShare to FacebookShare to Pinterest
Posted by Jessica Strider at 13:54

I think the ending is a bit weak and goes too much into melodrama, but I am a sucker for stories like this. :)