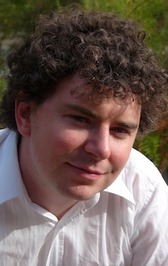 > What is The Rook about?

"The body you are wearing used to be mine." So begins the letter Myfanwy Thomas is holding when she awakes in a London park surrounded by bodies all wearing latex gloves. With no recollection of who she is, Myfanwy must follow the instructions her former self left behind to discover her identity and track down the agents who want to destroy her.

She soon learns that she is a Rook, a high-ranking member of a secret organization called the Checquy that battles the many supernatural forces at work in Britain. She also discovers that she possesses a rare, potentially deadly supernatural ability of her own.

In her quest to uncover which member of the Checquy betrayed her and why, Myfanwy encounters a person with four bodies, an aristocratic woman who can enter her dreams, a secret training facility where children are transformed into deadly fighters, and a conspiracy more vast than she ever could have imagined.

> Why did you choose to put the focus of The Rook on the bureaucracy?

For a couple of reasons, really. Firstly, I knew that The Rook was going to deal with that old cliché, the secret Government agency that deals with the supernatural. We’ve all seen it a million times, but it always bugged me that they were all so… tidy. They just swoop in and save the day, without ever having to do any paperwork. They never seem to have to worry about budgetary restrictions, or occupational health and safety. I decided this was an omission that needed to be rectified. And secondly, I always like it when the ridiculous and the bizarre are treated as the most routine and blasé of occurrences.

> You've got a degree in medieval history.  Do you see any historical fantasy novels in your future?

I definitely want to explore the history of the Checquy in more detail, and that’s an organization that stretches back well into history. And I’m working on a (non-fantasy) piece set in the Ottoman Empire right now, but it’s on the back burner while I work on the sequel to The Rook. 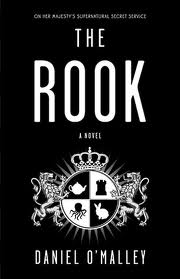 My mom is a writer, although she writes non-fiction, so I grew up thinking that writing for money was something that people can do. I was also fairly firm that I would not be a writer (this was my form of rebelling.) But, I kept having ideas, and I was bored, and I was having one of those days when nothing seems appealing on TV, and I’d read all the books on my shelf a dozen times, and I needed something to do. So I started writing. And I haven’t stopped.

I don’t think so, no. I tend to put them in fairly dangerous situations, and while it mostly works out for the best (mostly), there are still several casualties along the way. And besides, in my day job, I’m already a public servant, so I already know the stress of the job, without adding the possibility of getting my head clawed off by a gigantic weasel.

> What were your literary influences for The Rook?

Many, many books. But the ones I’ve read and re-read most frequently are Terry Pratchett’s Discworld series (for their brilliant humour), George MacDonald Fraser’s Flashman books (for a protagonist that can suffer the most undignified and dangerous of situations), and anything by China Mieville (for the sheer amount of detail and ideas that he crams into every book.)

I wrote a brilliant children’s novel, called Providence, during the last year of undergraduate university, and the first year of graduate school. So, two years. It dealt with sorcery in the Rhode Island city of Providence, and an underground army of mutants. It was genius, possibly one of the most important works of modern literature, and so naturally, it was not published. I am not at all bitter over this.

I think perhaps the scene where (pre-amnesia) Myfanwy gathers with her colleagues for a Christmas party, and knows that one of them will betray her. The knowledge that one of your closest comrades will deliberately destroy you seems like it would be an awful burden, and I found it hard to write that sort of emotion without pitching it over into melodrama.

Generally, I’m writing on the couch, with a muted TV on nearby. That way, if I get stuck, or if a good fight scene comes on, I can take a little break. Most of my writing happens in the evenings or on the weekends, since I also have a fulltime job.

Best thing: when you surprise yourself, when the story takes an unexpected turn, or an idea occurs to you that changes everything.

Worst thing: when you stare at something you’ve written, and honestly have no idea if it’s good or not.

Before they will buy your book, publishers want to talk to you. On the phone. I was really surprised, I thought “you’re looking to acquire the book, not me,” but there were several phone calls made, during which I was extremely worried that I would say something demented and alienate them. To make matters worse, they were all in radically different time zones from me, so I ended up trying to sound intelligent and witty whilst sitting in my PJs in the dark at 3 in the morning. 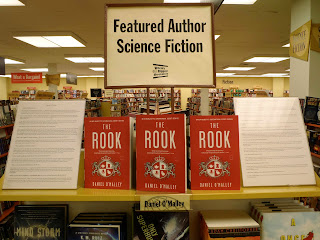 Write the sort of thing you like to read, not what you think will be popular. And remember, you have to be very lucky to get published. Keep writing, but always have something that can support you, and make you happy while you wait for your big break.

Also, once you’ve finished your book (and you must finish your book before you start trying to sell it), look for an agent. Having an agent makes all the difference, partially because having someone believe in you is glorious, and partially because many big publishers will be wary of someone who lacks representation.

I find it useful to have several projects on the go. If you’re stuck with one, then switch to something completely different. Also, I find that I get my best ideas when I’m walking the dog last thing at night. Therefore, anyone struck down by writer’s block should come walk my dog.

I’m fairly good at manufacturing copious amounts of guilt for myself. If a day goes by, and I haven’t gotten my minimum of two pages down (five on a weekend day), then the last few minutes before I fall asleep are filled with me staring at the ceiling, judging myself.

Oh, Man. An abundance. I don’t have the exact number, but they’re all festering away somewhere in the depths of the O’Malley archives
Email ThisBlogThis!Share to TwitterShare to FacebookShare to Pinterest
Posted by Jessica Strider at 15:32