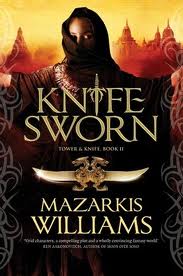 Cons: no book one synopsis/reminders

A year as Emperor hasn't brought Sarmin or his empire peace.  His army, under General Arigu at the command of the previous emperor, has attacked Fryth.  In an attept to mitigate the army's evils, Sarmin invites a Fryth envoy to discuss peace between their nations.

Cuious about the gifts of concubines he has received, Sarmin sends the untouchable Grada to follow the slave caravans that train the women.

Meanwhile, Sarmin's mother is worried that his new child will force the death of her own newborn son and a kitchen slave hears more than she ought while avoiding a fellow slave who likes to beat her.  And Mesema finds Sarmin turning away from her as a dangerous emptiness spreads from Beyon's tomb.

The writing is tight with several interconnected plots running through the book, showing various viewpoints.  The characters are all complex, with some unrepentant scoundrels as well as serious growth by Sarmin and his mother.

As with the first book I highly recommend this series.  And the ending really has me wishing the third book were already out.
Email ThisBlogThis!Share to TwitterShare to FacebookShare to Pinterest
Posted by Jessica Strider at 10:53

You beat me to this one, Jessica!

Got it as an advance on NetGalley. I finished it the day before I left on vacation. Great read. Can't wait for the third book.