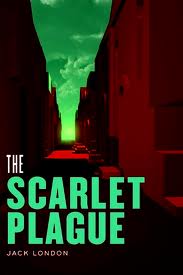 Cons: second half of the story especially is racist and has class overtones

Professor James Howard Smith tells his 3 grandsons about the plague that destroyed civilization in 2013.

Note: I read this on vacation just a few days before the US presidential election.  It was with a sense of shock that I came to this passage early in the book.  The professor is walking with one of his grandsons and mentions money, which the boy doesn't understand.  He remembers that he has a coin and shows his grandfather.  The old man looks closer to see the date the coin was minted, prompting the following speech:

"2012," he shrilled and then fell to cackling grotesquely.  "That was the year Morgan the Fifth was appointed President of the United States by the Board of Magnates.  It must have been one of the last coins minted, for the Scarlet Death came in 2013..."

According to London then, the world won't end in December 2012, we've got one year more before a plague decimates the world population.

The characters in the book, we are told, speak a guttural, clipped language.  Only the grandfather uses any refined speech, and that only when he's deep into reminiscence of the past.  Thankfully London doesn't write the book in dialect.  He gives a bit of it at the beginning for colour, but not enough to annoy the reader, and the longer the book goes on the less you see of it.

The story is interesting, plausible given current populations and the speed with which this particular plague kills.  The decline of language and banding together of the remaining people into clans is very believable.

While London tries to extrapolate what the world of 2012 will look like, he's coming from a time (1915) when airplanes are in their infancy, the Hindenburg disaster hasn't happened and telephone communication is just beginning.  In other words, he's completely wrong, but you have to give him credit for trying.  I imagine steampunk affictionados would have enjoyed his mix of planes and airships.

London's prose is highly descriptive, giving the reader a real sense of place and time.  Unfortunately part of that time includes the racism of his own day.  In the first half of the novel it's easier to ignore, as the character in question isn't described physically, only his negative character traits are brought up.  But towards the end of the tale it becomes clear that this horrible person has dark skin and is 'lower class' than the white woman he enslaves.  For modern readers the language he uses really kills an otherwise great post-apocalyptic story.  I found a few parts towards the end painful to read due to this issue.

It is well written, and, given the referencing, 2012 seems the right time to read it.  But be aware of the content before you crack this open, and if you don't like other books of its period for their racist references, give this book a pass.

The book is in the public domain and can be downloaded for free from the Gutenberg site. If you like paper, HiLoBooks has reprinted The Scarlet Plague as part of their Radium Age SF series.
Email ThisBlogThis!Share to TwitterShare to FacebookShare to Pinterest
Posted by Jessica Strider at 09:13