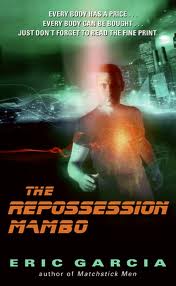 The unnamed protagonist of Reposession Mambo (republished as Repo Men) is typing his memoirs on an old Underwood typewriter in an abandoned hotel.  Once a level five repo man, charged with repossessing the artificial organs of those who stopped making payments, for the Credit Union (and others), he's now on the run, having his own artificial organ and unable to pay the extremely high interest rates.

Despite being character driven I never found my interest lagging.  The protagonist's life is so interesting, from his 5 ex-wives, to his job as a repo man, to his time in the military and friendship with Jake, it's a non-stop adventure.  He's a mix of contradictions.  He's described by a therapist at one point as having a great capacity for love, but each of his ex's call him a bastard.  He's not a cold hard killer, but has no problem ripping out someone's liver or heart, despite knowing the person's going to die because of his actions.  There's a brief mention of him repossessing children's organs, but no description (for which I'm thankful).  Perhaps the author realized that heading in that direction would destroy any sympathy the protagonist otherwise gains.  And he does gain some.  He's somehow a likable guy, despite the work he does.

The narrative is disjointed, jumping from time to time, keeping you on your toes trying to figure out what's happening and why he's now on the run.  Within that jumbled framework, comes a fairly linear life story, from highschool through military life, joining the Credit Union and all his wives along the way.  Even the present day story is fascinating, with everything he knows about repo men giving him a better chance at survival.  The mystery of why he's on the run is quite compelling.

As for the negatives, the story is crass at times.  His first wife's a prostitute and there's a lot of sex humour (though no eroticism or graphic descriptions).  It's not on the level of, say, Porky's style humour, but it is highschool style crass humour at times.  While I'm not a fan of that kind of writing, it did fit the book and character and wasn't overdone.

The world-building is very light.  You're only told about what the protagonist finds interesting, namely his life.  He's quite self-centered and focused in that respect.  There's some information about how the organ shops got started and the high interest rates that keep people's names on his pink slips, but not as much about this new world as I'd have liked given the interesting premise of the book.

The ending... I'm still not sure how I feel about it.  Again, it fit the story but I wasn't entirely satisfied by it.  The character has a chance to grow as a person and things don't work out as you're expecting.

A decent amount of action and a fascinating crew of characters make up Repossession Mambo.
Email ThisBlogThis!Share to TwitterShare to FacebookShare to Pinterest
Posted by Jessica Strider at 10:52