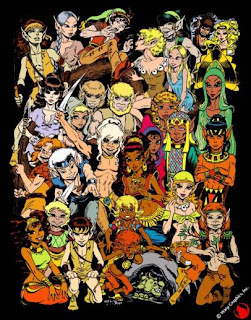 Time just flies, doesn't it?  I came across this some time ago and just never seemed to have time to post about it.  But this has me tickled pink.  Not only are the ElfQuest comics online, they are FREE.  I read a lot of these comics when I was in university (and didn't have time for books that weren't school related) but never finished the series.  I have (somewhat unrealistic given my pile of things to read) plans to reread these, and maybe review them, next year.

For those of you who have never heard of ElfQuest, here's a very brief synopsis from the site:

Elfquest (the original series): 20 "magazine-sized" comic book issues published in black and white from 1978 to 1984. These tell the story of Cutter, his tribe the Wolfriders, and their quest to find and unite other groups of elves against the threat of humans, trolls, and other assorted nasties.

If I remember the plot correctly, Cutter's tribe of elves have linked with wolves to help them survive life in the forest.  When the trolls force them from their homes, they go in search of other elves, and meet other groups of elves, most with more powerful magic than theirs and some that have adapted by linking with other creatures or have remained 'pure'.  If you want a fantasy story that has a variety of elves (in terms of cultures and races) than this is it.

The original series was written and drawn by Wendy and Richard Pini, but apparently other authors and artists have expanded the series.

If you're thinking of reading them, be aware that they're adult comics, with a fair amount of sex either shown or implied.  Personally I loved the artwork and thought the stories were pretty cool.  I even did a bit of fan art for this, though not as much as I'd wanted (I'd had plans to do all of the major characters and only managed to do two of them - maybe something else to do next year?).

You can find the comics gallery here with several more series than existed when last I picked up a volume (I read The Original Quest, Siege at Blue Mountain and, I believe the start of Kings of the Broken Wheel).  If you want to know what order to read the books in, here's a guideline.
Email ThisBlogThis!Share to TwitterShare to FacebookShare to Pinterest
Posted by Jessica Strider at 09:30