I got my holiday work schedule yesterday and it's a doozy.  I work retail so I know Christmas is going to be busy but I think this is the most I've worked in succession since I moved away from Toronto and got an hour+ commute each way.  Needless to say I may not be posting as much for the next few weeks and I definitely won't be commenting that promptly.

Next week is still pretty light, so I'll try to set up posts in advance for the weeks I'll be busier.  I'm not sure how reviews will go as the commute gives me time to read, but I've been pretty slow with finishing books the past few weeks and I don't really expect that to change as I'm going to be pretty tired.

Anyway, here are the books I got in November and hope to read soon. 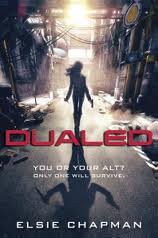 Dualed - Elsie Chapman.  This book reminds me of Marie Brennan's Doppelanger and Warrior & Witch duology (republished as Warrior and Witch), which I really enjoyed.  I'm interested in seeing how the author deals with the subject matter here.

Two of you exist.
Only one will survive.

The city of Kersh is a safe haven, but the price of safety is high. Everyone has a genetic Alternate-a twin raised by another family-and citizens must prove their worth by eliminating their Alts before their twentieth birthday. Survival means advanced schooling, a good job, marriage-life.

Fifteen-year-old West Grayer has trained as a fighter, preparing for the day when her assignment arrives and she will have one month to hunt down and kill her Alt. But then a tragic misstep shakes West's confidence. Stricken with grief and guilt, she's no longer certain that she's the best version of herself, the version worthy of a future. If she is to have any chance of winning, she must stop running not only from her Alt, but also from love . . . though both have the power to destroy her.

Etiquette & Espionage - Gail Carriger.  This one sounds like The Agency by Y. S. Lee, which I haven't had time to read but has an intriguing premise.  A finishing school novel told with Carriger's humour... gotta read this and soon.


Fourteen-year-old Sophronia is a great trial to her poor mother. Sophronia is more interested in dismantling clocks and climbing trees than proper manners--and the family can only hope that company never sees her atrocious curtsy. Mrs. Temminnick is desperate for her daughter to become a proper lady. So she enrolls Sophronia in Mademoiselle Geraldine's Finishing Academy for Young Ladies of Quality.

But Sophronia soon realizes the school is not quite what her mother might have hoped. At Mademoiselle Geraldine's, young ladies learn to finish...everything. Certainly, they learn the fine arts of dance, dress, and etiquette, but the also learn to deal out death, diversion, and espionage--in the politest possible ways, of course. Sophronia and her friends are in for a rousing first year's education.


Set in the same world as the Parasol Protectorate, this YA series debut is filled with all the saucy adventure and droll humor Gail's legions of fans have come to adore.

Every Day - David Levithan.  I heard about this book at the Random House kids preview, and it sounds incredible.

There's never any warning about where it will be or who it will be. A has made peace with that, even established guidelines by which to live: Never get too attached. Avoid being noticed. Do not interfere.
It's all fine until the morning that A wakes up in the body of Justin and meets Justin's girlfriend, Rhiannon. From that moment, the rules by which A has been living no longer apply. Because finally A has found someone he wants to be with-day in, day out, day after day.

The Kassa Gambit - M. C. Planck.  This is an alien first encounter novel that caught my eye.  It's out in early January.

Centuries after the ecological collapse of Earth, humanity has spread among the stars. Under the governance of the League, our endless need for resources has driven us to colonize hundreds of planets, all of them devoid of other sentient life. Humanity is apparently alone in the universe.

Then comes the sudden, brutal decimation of Kassa, a small farming planet, by a mysterious attacker. The few survivors send out a desperate plea for aid, which is answered by two unlikely rescuers. Prudence Falling is the young captain of a tramp freighter. She and her ragtag crew have been on the run and living job to job for years, eking out a living by making cargo runs that aren't always entirely legal. Lt. Kyle Daspar is a police officer from the wealthy planet of Altair Prime, working undercover as a double agent against the League. He's been undercover so long he can't be trusted by anyone--even himself.
While flying rescue missions to extract survivors from the surface of devastated Kassa, they discover what could be the most important artifact in the history of man: an alien spaceship, crashed and abandoned during the attack.
But something tells them there is more to the story. Together, they discover the cruel truth about the destruction of Kassa, and that an imminent alien invasion is the least of humanity's concerns