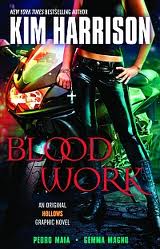 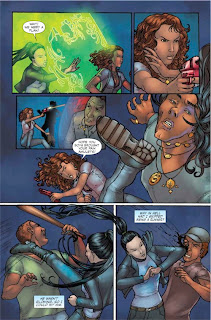 Artwork: not to my taste; in some cases the heads were too large with features and arms too small;  I liked the realistic shading though

This is an original story set in Kim Harrison's Hollows world.  Ivy, a vampire, has been demoted from homicide to street detail and her new partner, Rachel Morgan, a witch, is still in training.  Their easy drug case gets complicated when they find a dead werewolf drained of blood.  And Ivy's having trouble not putting the bite on her new, maddening, partner.

As this story takes place before the novels, I assumed it would be a good starting point for someone (like me) who hasn't read the novels.  It quickly became apparent that Harrison wrote this for fans of the series, people who would know background information, like who Piscary is and his connection to Ivy and how Ivy's power works.  I'm still not sure what her ghost form in the comic is: astral projection? some sort of vampire hunting mode?  If she attacks someone with it, would they die?

I also started with the impression that Ivy was kick ass.  That impression didn't last long.  And while Rachel could be annoying at times, she WAS kick ass throughout.  Still, I liked Ivy.  The story is told from her POV so you learn how she feels about things.  And her story's intriguing to say the least.  She also develops as a character in ways Rachel doesn't get the chance to.

The artwork wasn't my favourite, as sometimes body parts were too big or small compared to the rest of the body or weren't quite symmetrical.  I thought the shading and colouring were pretty good, going for lifelike gradients rather than black shading lines.

In the end, it's a decent debut graphic novel with room for improvement.  And I'm sure fans of the series will love seeing Ivy and Rachel meet - and clash - for the first time.
Email ThisBlogThis!Share to TwitterShare to FacebookShare to Pinterest
Posted by Jessica Strider at 12:03