For all you steampunk aficionados out there, there's a new steampunk web series starting soon called Mantecoza. 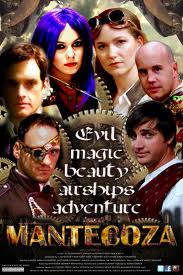 ANOTHER WORLD, JUST OUT OF THE REACH OF YOUR PERCEPTION...

Every decision you make results in a tiny disturbance in the fabric of reality, like a ripple in still water emanating from the toss of a single pebble.  Big decisions, like what career you pursue.  Small decisions, like which breakfast cereal to eat.  Some of these ripples, when they combine with waves of other origins, give rise to an entirely new set of circumstances... and can lead to the creation of an altogether new realm of existence.

Somewhere across the Atlantic, early on in the 1800's, a convergence of disturbances violently shifted the known world - enough to split reality in two.  Unbeknownst to us, there is another existence, governed by different rules and an alternate history.  This other world is powered by the energy from steam, and its populace still embraces the wonders of magic.  It is a reality that is out of phase and completely inaccessible to all of us - save one.

These are the stories of one common person who would cross that boundary.  Sebastian King has a destiny, but it is a destiny with endpoints in two worlds.  How he would fulfill this purpose, with friends that would help him along the way, is the subject of our tale.

Email ThisBlogThis!Share to TwitterShare to FacebookShare to Pinterest
Posted by Jessica Strider at 09:18