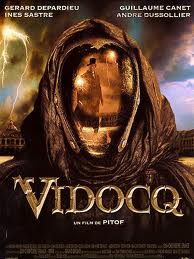 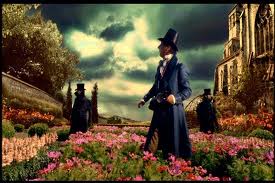 Cons: told mostly in flashbacks, which can be confusing

Vidocq (Gerard Depardieu), once a police inspector and now a private investigator dies while on a case.  Etienne Boisset (Guillaume Canet), a young journalist and Vidocq's biographer, follows up on his investigation to determine who his, apparently supernatural, killer was and bring the fiend to justice.

As Etienne questions each person a flashback begins showing what they know.  It makes the movie more interesting, but the transitions can be confusing if you don't know what to expect.

The visuals are striking, being so vibrant in colour they look fake.  Yet this creates the right atmosphere for the film.  The costumes include a lot of billowing cloaks, reds and greens.

The setting is Paris, and the backdrop of political unrest keeps the film grounded in reality, even when things start to become more surreal.

And the theme song, Hope Volume 2, by ApocalypticA is fabulous.

It is a French movie, so be prepared for some minor nudity and sexual scenes (generally in the background, but not always).

Watch the French trailer first, even if you don't speak the language.  The music they use in the English trailer, calling it Dark Portals, doesn't fit the mood of the film.


Email ThisBlogThis!Share to TwitterShare to FacebookShare to Pinterest
Posted by Jessica Strider at 10:55