Now For Something Completely Different

I don't like getting political on my blog, but I'd like to congratulate the people of New York state who were finally granted their civil liberties and able to tie the knot on the weekend.  Someone on facebook posted this link, to some great pro gay marriage protest signs.  My favourite is this one: 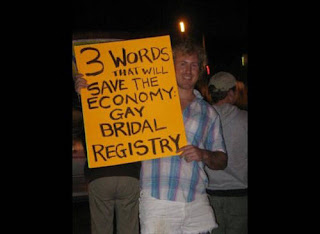 My second favourite is this one: 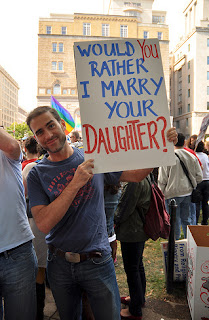 While I like the protest sign, it's an unfortunate reminder of what things used to be like.  One of the first series of books I read that dealt with GLTBQ content was Orson Scott Card's Homecoming series.  I can't remember if he turns up in the first or second book, but there's a character named Zdorab, a servant, who's forced to join this group of people leaving their homeland to search for Earth.  The group is paired up in marriages, which causes a problem for Zdorab, who's a closet homosexual.  He's had to hide this as the people of his world, including those he's travelling with, don't accept that behaviour.

Here's where things get interesting.  Despite being LDS (or Mormon), and following that church's guidelines regarding the GLTBQ community (ie: 'love them as people while condemning their actions' - I'll not comment on how well they achieve this or if it's even possible to love someone you're taught is fundamentally evil.  And before people harp on my not understanding the Mormons, or choose my blog to bash them, I was raised in that church and have left if over this issue, so I do know what I'm talking about and don't need Mormon bashing here.)  Anyway, despite being LDS, Card has a highly sympathetic view of Zdorab.  Here's a man who is only attracted to other men, who must marry this woman in order to hide who he is.  I (still a Mormon when I read this) expected Card to have Zdorab change sexualities and discover he's really straight.  Ie, to 'cure' him.

What happens is this: the woman's not keen on a forced marriage either and agrees to keep his secret. The two of them eventually develop mutual affection so when she decides she wants a child, he agrees to try.  Card describes their attempts as being entirely due to friction and him thinking of men during sex, as he can't get off with a woman.  Regardless of what he's said and done since, with those books Card taught me that one's sexuality is what it is and can't be changed, something I've never stopped believing.

So I'm glad I now live in a world where people are increasingly able to be who they are, to stop hiding and ruining their lives (and the lives of others) in an attempt to be 'normal'.  Hopefully the next few years will have other states following suit.

Here's to a better, more loving world!
Email ThisBlogThis!Share to TwitterShare to FacebookShare to Pinterest
Posted by Jessica Strider at 12:05