Not a Review - Nier: Automata 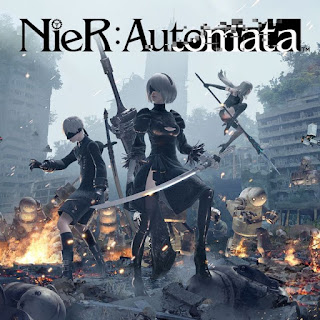 Cons: lots of unanswered questions at the end, some questionable content

Thousands of years ago aliens invaded the Earth and used machines to wipe out most of mankind. Now the remnants live on the moon and have created androids to help them retake their home world. YoRHa sends combat unit 2B and scanner unit 9S to Earth for reconnaissance and to help the resistance wipe out the machines. But they discover a new type of machine, one that looks human.

As I’ve said before, I’m not a gamer, and while I’ve played a good number of games, starting with the old Atari, Commodore 64, and original Nintendo Entertainment System, I’m terrible at them. I do love watching my husband play games though, especially ones with interesting stories. So when my husband got me to play the first level of Nier: Automata I didn’t expect to spend over 100 hours finishing the game.

First off, I played it on easy mode. This meant there were times when the game quite literally played itself (though, for the record, one of the 2 times I died was because I didn’t realize I could turn off the auto-fire system, which forced me to stay in an arena with constantly spawning enemies 20+ levels higher than me).

This was also my first time playing an RPG and I was shocked at how much fun I found all the levelling up battles - otherwise known as the grind. I thought that would be boring, but I enjoyed exploring the world and seeing (and killing) the wide variety of machines.

The game play automatically switches from regular mode to side scroller at times, with additional switches to air ship mode. Some of the side scroller switches were annoying (moving to the left suddenly changes to moving forward - a real pain when there’s a chest or something you need to get that’s just before the screen change and the game flickers you between modes). For the most part, it was cool seeing the different modes and the first chapter models all three (which is why my husband insisted I try it).

The reason I kept going after that first chapter was the story and characters. You start the game by playing as 2B. She’s mostly unemotional and her dialogue plays well with 9Ss complaints about their workload (side quests as well as official missions). The voice actors are absolutely incredible. Kira Buckland as 2B and Kyle McCarley as 9S especially deserve a lot of credit for making me care about the characters. They’re so expressive and made the characters fell alive.

I’m not sure if this has been done in a video game before - and it’s kind of a SPOILER - so if you don’t want to know what happens later in the game, skip to the next paragraph but… there comes a point where you get to the end and … the game starts again. Only this time you’re playing as 9S. The first time through you don’t really know what’s going on and there are so many side quests (some you can only do a certain points in the game) so getting a second chance to do some of those and to see the world before things change again, was really cool. Playing as 9S also comes with a new ability - hacking. And hacking allows you to find information about the old world. I also loved that you learn the back stories of some of the antagonists during this play through, and start to feel bad about killing the machines.

The world-building was mostly well done. The final boss battles left me with questions and exposed some holes in their backstory, which was unfortunate.

The world is fun and there were several hidden areas to explore off the regular map (that is, the sections you’re officially sent to for missions). I found the variety nice. There’s a desert, a ruined city, an amusement park, a factory, a forest with a castle, and a sunken city.

You fight a nice variety of machines, which are modified for their environments. The boss battles are all unique, with side stories.

The soundtrack was wonderful. Each section has its own themes and there are some really haunting vocals.

We didn’t know there was a previous game until I started looking up hints late in game play. It’s fairly clear there are a lot of callbacks to the original Nier, though I don’t know the full extent.

The game did have some problematic elements. Like when my husband was finishing off the achievements, we learned there was one for looking up 2Bs skirt 10 times, and another for playing as 9S without pants for an hour. I liked 2B and 9Ss main outfits, but couldn't stand the torn clothing they gave A2. We had a DLC that added battle arenas that gave each playable character a new outfit. I immediately switched A2 to the nice fully clothed hunter style outfit, but refused to use the skimpy lingerie 2B got and I really don't know what to say about the... apron thing for 9S.

Towards the end I was getting burned out. The game goes on for quite a while, and if you do all the side quests and fishing and everything, well, it's a LOT. While I enjoyed playing as a new character for the final sections of the game, I was unhappy over why that character was necessary.

On the whole I really enjoyed the game.
Email ThisBlogThis!Share to TwitterShare to FacebookShare to Pinterest
Posted by Jessica Strider at 10:51