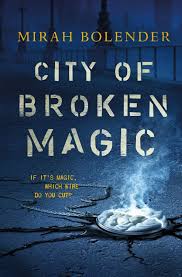 The city of Amicae is built as a 6 tiered structure with an outer wall. It citizens believe the wall keeps magical infestations at bay but that’s a lie. Infestations from broken or improperly cared for amulets happen all the time, and when they do the cops call in the experts: the Sinclair Sweepers.

Laura is Clae Sinclair’s only apprentice in the dangerous work. She wants to prove she has worth as a person in a society that sees her as more of a walking womb. When they acquire a second apprentice and infestations start to increase, she gets her chance.

It took me a while to get into this. First because the world started out feeling very medieval fantasy despite its bicycles and robots. The worldbuilding was alternately slow and full of info dumps in the opening chapters.

Clae is acerbic and rude and while I liked him, he takes some getting used to. For the most part I liked Larua, though I was surprised by her age when it was finally revealed, as I ended up picturing her younger given how she treats Okane.

As a master teaching a trade, Clae’s a mixed bag. On one hand he does teach weapons and technique, but I was astonished by how little Laura knew about kin and its creation. As the main weapon against infestations, I would have thought learning how to make kin would be vital to a sweeper’s job.

I loved the monsters and how the sweepers fight them. It’s very original. I also liked that another city is visited and there’s some information on how the various cities operate and that sweepers use different tactics and that they share ideas through meetings and letters.

The last half of the book was quite fun and the pacing was much better as the tension worked up to the climax.

While it’s a bit uneven, it’s a good debut and I’m curious to see what’s next.
Email ThisBlogThis!Share to TwitterShare to FacebookShare to Pinterest
Posted by Jessica Strider at 10:31