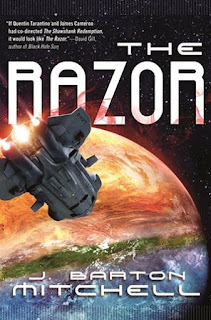 Flynn is an engineer framed for murder, being sent to the most dangerous prison planet that exists: the Razor. Half of the planet is frozen, the other half boiling, and in the middle, there is a small strip of liveable ground. The planet is home to the purest form of Xytrilium in the galaxy, and whoever controls that power source, controls the galaxy. So when a strange beam lights up the sky and all the guards evacuate, Flynn knows something bad is happening. He’ll have to team up with a group of dangerous misfits if he wants to survive, and get off the planet before it’s too late.

The book opens with Flynn’s arrival on the planet and while it take several chapters before things start to go wrong, the characters and setting are quite fascinating and carry the book easily. Short chapters and a lot of action makes this a quick read.

The characters are an interesting mix. Flynn is book smart but that won’t save him in with the general population of inmates. Key is street smart but feels the weight of the people she’s let down, and tends to cover her fear with bravado. Maddox is an ex guard, turned prisoner, who faces a rough welcome from his previous squad members. He’s also got a guilt complex for the people he couldn’t save. Raelyn is a doctor who made some bad decisions and is living with the consequences. Zane was probably my favourite character, a man who was experimented on and is now super strong, with the ability to absorb metal.

The romance between Maddox and Raelyn made a kind of sense, with him using saving her as motivation for living. It still seemed somewhat out of place considering the severity of what was happening. The romance between Key and Flynn felt like something that might burn hot and die out quickly as they have nothing in common to keep them interested in each other after the adrenaline rush of staying alive is over. It also seemed a bit odd that all the main characters paired up. I did like that neither pairing felt rushed. They both developed fairly slowly and organically.

The Razor is a fun read with good set-up for the sequel.
Email ThisBlogThis!Share to TwitterShare to FacebookShare to Pinterest
Posted by Jessica Strider at 09:54