Book Review: The Resurrectionist: The Lost Work of Dr. Spencer Black by E. B. Hudspeth 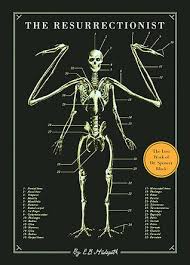 Cons: dry text, little explanation of how these evolutions work within the framework of other biological data, illustrations don’t progress far enough

This is a scholarly work giving a brief biography of the brilliant but ultimately misguided Dr. Black and reprinting his lost manuscript, the Codex Extinct Animalia.

The book does a good job of sounding appropriately scholarly in regards to the fictitious Dr. Black. A little too good, as it’s quite dry and often boring even as it describes what should be fascinating: a man whose conviction that mythological creatures were based on real human and/or animal evolutions, and that people and animals with strange medical conditions and physical abnormalities are recovering that genetic heritage.

The problem is that the text never really goes into how such a variety of creatures could have evolved or why they then devolved. Take Cerebus - Canis Hades in the text - the three headed dog. If it was a creature that evolved to have 3 heads, why did two heads die out? Where are the examples of 2 headed dogs in mythology? Did both excessive heads disappear at the same time? We’re given to believe the doctor pondered such issues but the text’s author doesn’t seem to care about them, and for me at least, this is the more interesting side of what’s being examined.

The codex itself has some wonderful illustrations of what the skeletal and musculature of such creatures would look like (including the Sphinx, Ganesha, Pegasus). Alas, here too the information is scant and the descriptions lacking. The Pegasus for example is conjectured to have air bladders that help with flight, but air bladders are neither bone nor muscle and so they don’t show up on the illustrations. The only item that’s thoroughly done is the harpy, for which the illustrations go into more layers, so the flight bladders there are shown. I was also disappointed that there was no discussion of how other major physical changes worked, like Ganesha’s two pairs of arms. The skeleton shows there’s a sort of flap extending out the back that holds the extra shoulders, but there’s no discussion of how two sets of arms work in practice (is one shoulder in front of the other? Do the arms interfere with each other? Is there an evolutionary advantage to having four arms?).

I did appreciate that there were some non-Eurocentric creatures included in the Codex.

On the whole it was a quick read but I probably wouldn’t read it again.
Email ThisBlogThis!Share to TwitterShare to FacebookShare to Pinterest
Posted by Jessica Strider at 10:13