I had the privilege last week of attending the Random House kids preview in Toronto.  A lot of the good genre books coming out are sequels to other books, like BZRK Reloaded by Michael Grant (follow-up to BZRK), Enders by Lissa Price (the conclusion of Starters) and Monsters, book 3 of the Ashes trilogy by Ilsa Bick.  And of course they mentioned Brandon Sanderson's teen novel Steelheart and James Dashner's new The Eye of Minds.

But there are some new series and standalones coming, so I'll be focusing on those.

The last time seventeen-year-old Amelia Mackenzie saw her best friend Matthew alive, he broke her heart. When he is found the next day in an abandoned barn at the edge of town, an apparent suicide, Amelia''s whole world comes crashing down.

And then she sees him again. Because Amelia has a secret that even Matthew didn't know: sometimes, she sees ghosts.

When a local history columnist named Morris Dyson contacts Amelia after the funeral and tells her that he thinks the barn Matthew died in is haunted, and that Matthew wasn't its first victim, an unlikely partnership is born. With Amelia's gift for seeing ghosts, Morris''s radical theories on the supernatural, and a bit of help from Morris''s sexy but skeptical son, Kip, a mystery unfolds. One by one, the barn''s other ghostly residents are revealed: all innocent, love-struck young men who've died horrific deaths, seemingly by their own hands.

Life and death couldn't get more complicated as Amelia is torn between her devotion to the ghostly Matthew and her growing attraction to Kip, who may not believe in ghosts but can't help believing in Amelia. When she's confronted with a rivalry between the living and the dead, which side of the great divide will Amelia choose?

Apparition is a fast-paced supernatural mystery about memory and obsession, bodies and spirits, love and loss.


Shadows by Paula Weston - for all the angel lovers out there.

It's almost a year since Gaby Winters watched her twin brother die. In the sunshine of a new town her body has healed, but her grief is raw and constant. It doesn't help that every night in her dreams she fights and kills hell-beasts. And then Rafa comes to town. Not only does he look exactly like the guy who''s been appearing in Gaby's dreams, he tells her things about her brother and her life that cannot be true, things that are dangerous. Who is Rafa? Who are the Rephaim? And who is Gaby? The truth lies in the shadows of her nightmares.

What happens when you can't do the one thing that matters most? Twelve-year-old Hope Toriella lives in White Rock, a town of inventors struggling to recover from the green bombs of World War III. But Hope is terrible at inventing and would much rather sneak off to cliff dive into the Bomb's Breath-the deadly band of compressed air that covers the crater left by the bombs-than fail at yet another invention. When bandits discover that White Rock has priceless antibiotics, they invade. With a two-day deadline to finish making this year''s batch and no ingredients to make more, the town is left to choose whether to hand over the medicine and die from the disease that's run rampant since the bombs, or die fighting the bandits now. Help lies in a neighboring town, but the bandits count everyone fourteen and older each hour. Hope and her friends-Aaron and Brock-might be the only ones who can escape to make the dangerous trek through the Bomb's Breath and over the snow-covered mountain. Inventing won't help her make it through alive, but with Aaron and Brock's help, the daring and recklessness that usually gets her into trouble might just save them all.

Caught in an unexpected spring squall, Corrine's first instinct is to protect her little sister Sophie after a nasty fall. But when Corrine reaches out to comfort her sister, the exact opposite occurs. Her touch--charged with an otherworldly force and bursting with blinding indigo color--surges violently from Corrine to her sister. In an instant, Sophie is dead. From that moment on, Corrine convinces herself that everyone would be better off if she simply withdrew from life.

When her family abruptly moves to New Orleans, Corrine's withdrawal is made all the easier. No friends. No connections. No chance of hurting anyone. But strange things continue to happen around her in this haunting, mystical city. And she realizes that her power cannot be ignored, especially when Rennick, a talented local artist with a bad-boy past, suggests another possibility: Corrine might have the touch. An ability to heal those around her. But knowing what happened to her sister, can Corrine trust her gift?


Of Beauty and Beast by Stacey Jay

In the domed city of Yuan, the blind Princess Isra, a Smooth Skin, is raised to be a human sacrifice whose death will ensure her city's vitality. In the desert outside Yuan, Gem, a mutant beast, fights to save his people, the Monstrous, from starvation. Neither dreams that together, they could return balance to both their worlds.

Isra wants to help the city's Banished people, second-class citizens despised for possessing Monstrous traits. But after she enlists the aid of her prisoner, Gem, who has been captured while trying to steal Yuan's enchanted roses, she begins to care for him, and to question everything she has been brought up to believe.

As secrets are revealed and Isra's sight, which vanished during her childhood, returned, Isra will have to choose between duty to her people and the beast she has come to love.


There are some great picture books for kids coming out. 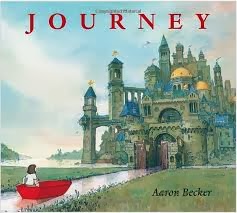 Follow a girl on an elaborate flight of fancy in a wondrously illustrated, wordless picture book about self-determination - and unexpected friendship.

A lonely girl draws a magic door on her bedroom wall and through it escapes into a world where wonder, adventure, and danger abound. Red marker in hand, she creates a boat, a balloon, and a flying carpet that carry her on a spectacular journey toward an uncertain destiny. When she is captured by a sinister emperor, only an act of tremendous courage and kindness can set her free. Can it also lead her home and to her heart's desire? With supple line, luminous color, and nimble flights of fancy, author-illustrator Aaron Becker launches an ordinary child on an extraordinary journey toward her greatest and most exciting adventure of all.


Whimsy's Heavy Things by Julie Kraulis - I've flipped through this one, and the artwork is dark and rather appealing. 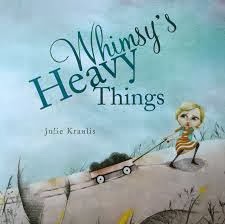 Whimsy's heavy things are weighing her down. She tries to sweep them under the rug, but she trips over them. She tries to put them in a tree, but they fall on her. She even tries to sail them out to sea, but they always come back. Eventually Whimsy decides to deal with the heavy things one at a time... and a surprising thing happens. With exquisite illustrations and delightfully simple text, Whimsy's Heavy Things is a sweet story about changing the things that weigh us down into the things that lift us up.