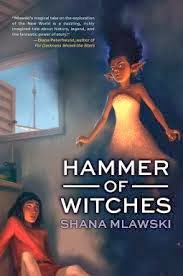 When Balthasar Infante is picked up by the Malleus Maleficarum he discovers that his uncle is correct and stories have power.  Turns out he's a Storyteller, a sorcerer able to pull items and creatures out of stories.  He quickly learns that his parentage isn't that of a converso Jew as he's always believed, but Muslim.

Armed with a prophecy he wants to stop, and still running from the Malleus Maleficarum he joins the crew of the Santa Maria as Cristobal Colon's new translator, heading west to the Indies.

I loved the diversity of the characters.  Spain at this time was multiracial and though everyone either had to convert to Christianity or leave, the whole point of the Inquisition was to root out false converts, meaning there assuredly were some.

Balthasar's experiences being bullied for his heritage and his hero are realistic, making him a very sympathetic protagonist.  It's great watching him learn more about the world, questioning his beliefs as he must interpret the different stories to call on his magic.

I also appreciated that the stories came from different backgrounds: Jewish mythology, Arabic mythology, Greek mythology and fairy tales.  Storytelling itself was an awesome form of magic that I know I'd love to have.

* The difficulty in talking about this book is that several of the things that annoyed me in the story were either explained later in such a way that they became accurate (like Catalina's feminist reading of Sleeping Beauty), or were mentioned in the author's note (like her depiction of the Malleus Maleficarum).  I loved her author's note.  Having a detailed overview of what she manufactured vs what was historically accurate was awesome.  I'd love to see more authors do this at the ends of their books.

The biggest hurdle the book must face is the reader's knowledge (regardless of how accurate) of Columbas' journey.  I don't know much of what happened (which made her author's note all the more fascinating as I'd assumed she'd fabricated more than she had), but I do know that things don't end well for the natives.  There were times when it was hard not to get annoyed by Balthasar's naivete in the face of my knowledge of what's to come.

The biggest irritant in the book itself was that despite the fact that Balthasar and Jinni board the Santa Maria under assumed names, they continually scream each others real names out whenever something happens, in front of other people.  Yet no one questions this.

The book uses several common fantasy tropes.  On a few occasions they're subverted, making them feel fresh, but often they're not.

But despite the book's problematic elements I appreciated that the author didn't shy away from the horrors of the real world.  And her use of characters and creatures outside the fantasy norm is much needed to revitalize the genre.
Email ThisBlogThis!Share to TwitterShare to FacebookShare to Pinterest
Posted by Jessica Strider at 13:52