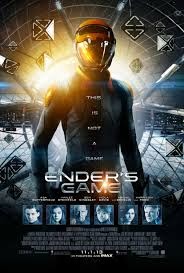 Ender Wiggin (Asa Butterfield) is recruited for battle school and training to be a general in Earth’s fight against the alien Formics.

I give the film kudos for not only keeping the tone of the book but squishing in all the major elements of the novel.  The main downside of this is that there isn’t time for the character development and relationships that made the book interesting.  I’d have loved seeing more of the battle school training battles, with Ender developing his leadership skills and bonding with his team over their triumphs.

I felt that Harrison Ford did a fantastic job as Colonel Graff.  His character is cold, but there are hints that he understands what he’s doing to his young charges, and regrets it.  One of his scenes pretty much gives away the ending's twist, assuming you don't already know what's coming.

Butterfield is a great Ender, wanting affection but waffling between anger and compassion in how he deals with the trials he faces.  I don't know how they made him look 10 years old, considering the actor's 16, but they did and he looks suitably pathetic when necessary.

I loved that the cast was multi-racial, with people of all backgrounds - and genders - in all positions.  I also loved how Bonzo (Moises Arias), one of Ender’s commanders - and bullies - is shorter than him, if significantly more muscular.

The special effects were well done.  I loved the computer screens and their hand manipulation of them.  And the training room looked great, though it was underused.

This is a film that would have benefited from being an hour longer.  While it touches on all the major events of the book, there’s little time for the character development and friendships that the book depends on.  There's little of his relationship with Valentine and Peter, his siblings who - in the novel - shape Ender the most.  Similarly, there are some scenes that depend on your knowledge of the book for full understanding.

Ultimately, I enjoyed the film and would definitely see it again.

I agree. I thought the casting was outstanding and that they really did a nice job attempting to get many of the elements of the novel in there. But there simply wasn't enough time. It is unfortunate because had the ending not been fairly well known/easy to spoil, I wonder if they would have consider splitting this into two films. As it is, I was more impressed than I thought I would be and plan on buying it on bluray when it comes out.