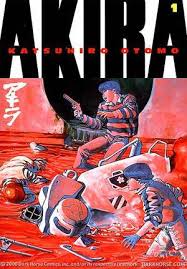 Cons: not my favourite art style but it grew on me, lots of violence some of which is fairly graphic (especially at the end), characters are hard to sympathize with

While biking at night in a restricted zone near the blast that forced the building of Neo-Tokyo, Kaneda's band of 15 year old hoodlums runs into a strange figure, a boy with the face of an old man.  One of the bikers, Tetsuo, is injured and taken to a mysterious hospital where he develops psychokinetic abilities.  Meanwhile, Kaneda becomes involved with an organization trying to stop the military from gaining too much power and trying to free a mysterious entity called Akira.

Akira is a classic, both in anime and manga format.  While I watched the movie several years ago, I'm just now getting to the manga.  The first issue was interesting, though I'm not a huge fan of the art style.  I did find that the longer I read, the more it grew on me.  I'm also not a fan of graphically violent images in my manga, and this has quite a few, especially towards the end.

The story itself was interesting.  It's basically the plot of the film, with some changes (it's a longer arc, with more escapes from the military than in the film).

The characters aren't very sympathetic.  Kaneda's something of a jerk, and really clueless about women, pushing himself at Kai and not understanding why the school nurse (helper? she's pretty young, looking his age) is angry at him when he's using her to get drugs and ignores the fact that she's pregnant (with, the reader is led to assume, his child).  Tetsuo meanwhile goes insane with power.  Kai's interesting, but somewhat one dimensional as a terrorist/love interest.

While I found this issue interesting, I'm not sure I liked it enough to read more.
Email ThisBlogThis!Share to TwitterShare to FacebookShare to Pinterest
Posted by Jessica Strider at 11:20