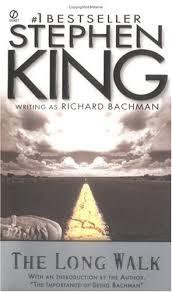 Cons: don't learn much about the world or why the walk is put on, crass discourse

Every year 100 teen boys join the Long Walk.  They walk at 4 miles per hour, day and night, until they can't go any further and are given their ticket.  The prize for the winner is great.  But it's a long, long road.

This is a character driven dystopian novel that focuses on a small group of walkers in the current year's Long Walk.  The characters become very real, three dimentional people.  Which makes reading the book difficult, as you're slowly watching them die.

As the walk progresses and the characters discuss why they've joined it and who will survive, you're left questioning many things as the reader - are you the same as the crowd that lines the road, hoping to see blood?  Or are you one of the boys, learning that you don't want to die because death is suddenly so close?  Unlike the crowd you see the characters as human.  You feel their pain.  As someone who walked the last 100+ km of the Santiago de Compostella pilgrimmage in 5 days, I really did feel their pain.  But even as you feel their pain and sympathise with their situation, you're still a spectator, safe in the knowledge that you can stop walking, sit down, enjoy today with the knowledge that tomorrow is coming.

The book also makes you think about peer pressure, and how much easier it is to go with the status quo than to fight it, even when you life is on the line.

I was disappointed that you don't learn much about the society that allows - nay encourages - the Long Walk year after year.  Clues in the text indicate that America has become in some ways a police state, but the extent of it is hidden from the reader.  Similarly, the early text leads you to believe that the boys volunteer for the walk, which isn't quite the case.

I wasn't a fan of some of the boys' discussion, but I accept it as realistic.  There's some crass humour as well as discussions of bodily functions, etc.

If you liked The Hunger Games or Battle Royale and want a less violent, more introspective version of the same ideas, then check this out.
Email ThisBlogThis!Share to TwitterShare to FacebookShare to Pinterest
Posted by Jessica Strider at 10:10