Book Review: A Natural History of Dragons: A Memoir by Lady Trent by Marie Brennan 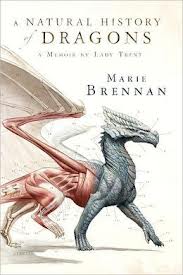 Isabella, Lady Trent, looks back on her life in this memoir.  It begins with her as a child obsessed with dragons and some of the crazier things she did in order to learn more about them.  Her hijinks don't end as she becomes a young lady looking for a suitable match with a library he'll let her read.  The book concludes with the first of what would be many excursions researching dragons.

Peppered with illustrations by Todd Lockwood, this is a gorgeous book.  The print is a faded brown, rather than black, making it feel old and venerable.

Brennan obviously cribbed from history for this, as Scirland feels much like Victorian England in its social conventions and expansionist ideals.  Similarly, Vystrana made me think of Eastern European villages, perhaps along the Russian border (as they're ruled by a Tsar).  Regardless of what she cribbed from however, the world feels REAL.  There are numerous languages, religions, customs, economic concerns, social concerns (different for men and women), class concerns, etc.  In many ways, reading this memoir felt like reading an actual memoir, with just enough details about the daily life and times of the protagonist (which she mentions were different from the life and times of the present from which she's writing).

The pacing is great, with new challenges appearing for Isabella just as the previous ones are dealt with.

The only problem I could see with the book was that Isabella is amazingly lucky.  She manages to get herself in and out of some difficult situations with fewer negative consequences than one would expect.

The ending is properly shocking, with the acknowledgement that there's more to the story.  Given what she goes through in this volume I look forward to reading about her further adventures.
Email ThisBlogThis!Share to TwitterShare to FacebookShare to Pinterest
Posted by Jessica Strider at 10:44