I saw this book mentioned in Romantic Times Magazine.  The author is from Israel and the book was published in 2004, winning the 2005 Geffen Award for the best fantasy/science fiction novel of the year and the 2006 Kugel Award for Hebrew literature.  It's out in Canada and the U.S. on June 25th.  Here's the synopsis: 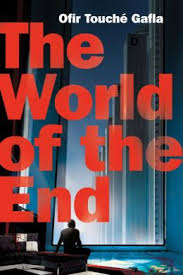 As an epilogist, Ben Mendelssohn appreciates an unexpected ending. But when that denouement is the untimely demise of his beloved wife, Ben is incapable of coping. Marian was more than his life partner; she was the fiber that held together all that he is. And Ben is willing to do anything, even enter the unknown beyond, if it means a chance to be with her again.


One bullet to the brain later, Ben is in the Other World, where he discovers a vast and curiously secular existence utterly unlike anything he could have imagined: a realm of sprawling cities where the deceased of every age live an eternal second life, and where forests of family trees are tended by mysterious humans who never lived in the previous world. But Ben cannot find Marian.

Desperate for a reunion, he enlists an unconventional afterlife investigator to track her down, little knowing that his search is entangled in events that continue to unfold in the world of the living. It is a search that confronts Ben with one heart-rending shock after another; with the best and worst of human nature; with the resilience and fragility of love; and with truths that will haunt him through eternity.

This next book is coming out in December, but I saw the cover here, and thought it looked interesting. 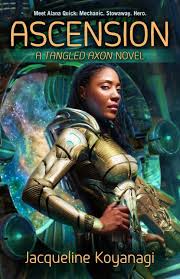 Alana Quick is the best damned sky surgeon in Heliodor City, but repairing starship engines barely pays the bills. When the desperate crew of a cargo vessel stops by her shipyard looking for her spiritually-advanced sister Nova, Alana stows away. Maybe her boldness will land her a long-term gig on the crew. But the Tangled Axon proves to be more than star-watching and plasma coils. The chief engineer thinks he's a wolf. The pilot fades in and out of existence. The captain is all blond hair, boots, and ego... and Alana can't keep her eyes off her. But there's little time for romance: Nova's in danger and someone will do anything - even destroying planets - to get their hands on her!