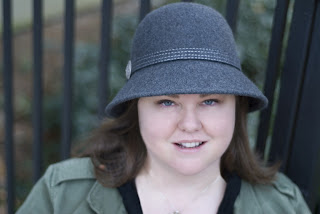 > What is your Arcadia Bell series about?

Arcadia "Cady" Bell is a mage who runs a Tiki bar in Central California. She's been living under an alias because her family is wanted by the FBI for allegedly murdering the leaders of several occult organizations. She also has the rare ability to identify Earthbound demons—humans on the outside, demons on the inside—which leads her to partner with an Earthbound demon named Lon Butler.

> You were born in Germany and have lived and travelled to a number of places and now live in the U.S.  What's the coolest place you've been and why?

Probably Hong Kong. It's dense and energetic, easy for English speakers to navigate, and surrounded by lush beauty.

> Have your travels influenced your writing at all?

Absolutely. Traveling not only opens you up to a variety of locales, but a variety of people and experiences, as well. You can't get falling-down drunk in a Taipei karaoke bar surrounded by drag queens and "working girls" with rooms in the back without some of that leeching into your well of inspiration.

My college background is in art and painting, but I ended up doing the 9-to-5 corporate office thing (marketing and product development), which made me ridiculously unhappy. One day, my then-boss asked me what I'd do if I wasn't working there. I immediately blurted out, "I'd write a novel." I'd never really thought seriously about writing before that moment. A few months later, I gave into temptation and wrote my first book.

> Why did you choose to make your protagonist a renegade magician bartender?

Urban fantasy already had its fair share of detectives, bounty hunters, and generic monster slayers. I suppose I wanted to do something a little outside the box. I've always had a fascination with the occult, and I’m rather fond of the retro kitsch vibe of the Tiki scene. But the heart of my series is the characters and their relationships—not the setting or the world building.

> What were your literary influences for the Arcadia Bell series?

> What are you working on now?

The first novel I wrote centered on portals into a fantasy realm. It was awful. I had zero idea what I was doing—I just flailed around in the dark and hammered it out in a month. KINDLING THE MOON was the third book I wrote. It snagged me a literary agent, who sold it to one of the Big 6 New York publishing houses in five weeks. From the time I wrote my first word until I sold my first book: 1 1/2 years. That was two years ago. I’ve since sold six books and one novella.

The final two scenes in BINDING THE SHADOWS. I shed a few tears putting those words together. I knew that they were scenes that had to be written, because that was the story that needed to be told, but it was physically painful to do it.

Best? Creating characters than readers love. Worst? The famously s-l-o-w machine that is the traditional publishing house. By the time a book comes out, I’ve already written three more.

Learn how to do things the right way (grammar, plotting, page count, genre expectations), then have the guts to break a few rules and forge your own path. 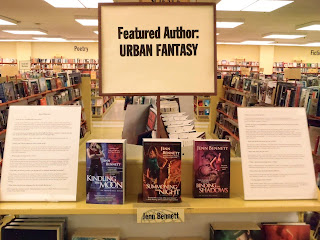 Walk around outside. Take a drive in a place you don't visit often. Play a video game. Read a book in a new-to-you genre. Do something that flexes your mental muscles in a way that isn't explicitly related to writing—one that requires you to look at things differently.
Email ThisBlogThis!Share to TwitterShare to FacebookShare to Pinterest
Posted by Jessica Strider at 10:34