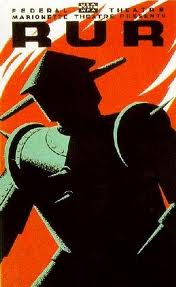 Pros: first use of the word 'robot', social concerns of using artificial labour to replace humans, fears of uprisings and treating everyone the same

Cons: product of its time with regards to depiction of black nanny*, Jewish accountant and infantile woman

R.U.R. is short for Rossum's Universal Robots.  Written in 1920, this play introduced the term 'robot' into the English lexicon, though the robots described in the story are human in appearance with skin and tissue rather than mechanical parts.  The play begins with the arrival of Helena Glory to a private island where a group of male specialists produce robots based on formulas created by a deceased scientist named Rossum.  After the prologue, the play is told in three acts, which take place ten years later, after robots have become indispensable to the nations of the world.

The story indirectly addresses fears of robots taking the jobs of human workers, becoming soldiers sent to kill humans, and finally rising up against their human overlords.  As the location of the play never leaves the island, the viewer learns about the social impact of the robots on the rest of the world through the interactions of the specialists, Helena, and her nanny.

The only con with the play is the obviously racist/sexist depictions of the characters.  While the accountant doesn't do anything stereotypically Jewish negating the need to refer to the character as a Jew in the first place (it's easy to overlook the casting direction when you're reading the play and his religion is never mentioned in the play), the nanny speaks in broken English and is treated in some ways as a child by Helena.  Helena herself is treated like an imbecile by the men, with them taking care to not to tell her what's going wrong on and off the island.

Aside from that, the play is very readable and at 55 pages, only takes a short time to read.  It's in the public domain, which means you can read it for free.  I found my copy at manybooks.net.

* According to a comment on this review on Goodreads by the translator, the nanny was meant to have a Prague accent rather than depicting a black nanny as I assumed.  I read her lines like the broken English you hear in films like Gone With the Wind and didn't consider the time/place of the play's production.  This is also something that would come across when viewing the play that's isn't necessarily easy to get when reading it.  My apologies for this error.
Email ThisBlogThis!Share to TwitterShare to FacebookShare to Pinterest
Posted by Jessica Strider at 10:37