Book Review: Up Against It by M. J. Locke 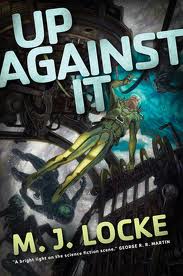 Jane Navio manages resources for 25 Phocaea, an asteroid settlement.  When an accident destroys most of the current shipment of ice that provides water, air and fuel for the colony, she's beset by numerous problems.  A feral sapient is born from the disaster and must be dealt with before it creates havoc and the martian mob appears to be the only ones in possession of enough ice to save them.  But Jane's dealth with the mob before, on her previous home, Vesta.  She barely escaped with her life.  Many others she knew weren't so lucky.

Meanwhile, four young bikers who happened to be at the scene of the accident, keep getting in and out of trouble as they cross paths multiple times with those investigating and those exacerbating the crises.
This is a clever hard SF story with multiple major conflicts and some great protagonists.  Jane is a complex character who's used to dealing with politics even though she's not keen on them.  She's first introduced making a life or death decision reminiscent of Ripley, but while she's got a cold exterior, she's got a sense of morality that won't let her deal with the mob, even when their ice shipment appers to be the colony's only means of survival.

While the book focuses on certain people, it's clear that this is a large colony, with multiple layers of bureaucracy that are mentioned when necessary, but not in enough detail to swamp the book.  I only remember one occasion where a name was mentioned and I couldn't place it because it was a beurocrat only mentioned in passing before.

The larger world is also shown to have complex politics and economics, even if they're only hinted at.  There's the martian mob, the 'Stroders (cameras that record what happens in the colony) sending data to reality TV watchers on Earth, and the Earth politics that made gene splicing illegal and forced the Viridians to emigrate.  Apparently Canada's no longer a nice place to live, as it's referenced as having refuge camps and detainee centres.

I appreciated the mix of races and religions represented, as well as sexualities, from the expectant homosexual couple barely mentioned in a park to the Viridians who prefer non-gendered pronouns that reflect their gene spliced states.

One of my favourite things in the book was Tonal-Z, a music based programming language used to talk to the feral sapient.  The acknowledgements credit a real life interface concept as the genesis for it and I'd have loved to see more of it in action.

The only problems with the book that I found were that the 4 teens kept running into more and more problems in a way that started to feel manufactured even though there were logical reasons why they were in each of the places.  And while I liked the fact that, given the locations, characters realized if they were going to get out of bad situations they needed to save themselves as the chances of someone else learning of their problem and/or arriving in time to help were slim, there were a few times when characters got out of tough spots remarkably easily.  Similarly, given all the problems the protagonists faced, the ending seemed a little too pat.

If you're looking for space battles, look elsewhere.  There are a few fight scenes (which are all remarkably different), but on the whole this is a cerebral SF novel.

If you like interesting science, cool characters, depictions of what it might be like to live in space and complex world building, then give this book a try.
Email ThisBlogThis!Share to TwitterShare to FacebookShare to Pinterest
Posted by Jessica Strider at 18:07

I absolutely loved this book when I read it 2011. It's way too underrated and under read.