I read a couple of interesting articles yesterday that I thought I'd share.

The first was an article by Tobias Buckell, author of, among other things, Crystal Sky, Arctic Rising, and several Halo novelizations.  It's about how only looking at the self-publishing success stories is giving authors a skewed picture of their own chances of success.  Why is this a problem?

"...because so many rah rah eBook advocates have been indicating to me that if I’d only just publish digitally first I’d keep 70% of the profits and *obviously* make more than I would with ‘traditional publishing."

As an author who's been published by one of the big 6 and also done a successful kickstarter campaign,  and sold stories through fictionwise, he's in a good place to judge how accurate the 'everyone can do better on their own' idea works in practice.

He links to a power point presentation by Smashwords founder Mark Coker, which is pretty interesting.  it was done for the Romantic Times Conference, so the later graphs deal specifically with those genres, but Buckell: focused on this slide: 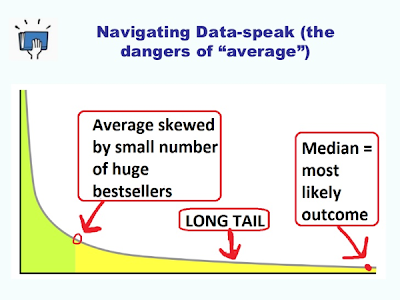 Basically, there is a small group of most books on Smashwords sell a lot (that's the green) and they're making it seem like everyone's doing well, while most people are actually by that dot at the end of the graph.  Quoting again:

Like in most cultish behavior, if you follow the rules and don’t get the results, you’re either ostracized, ignored, or it’s pretended you don’t exist. Many who don’t get the same results just shut up and go away. Thus creating an environment where people are creating massive amounts of confirmation bias by continually listening to the top sellers.

He then links to this post on survivorship, which is definitely worth the read.  There's a story about a WWII scientist, whose story is used as an example of why only paying attention to those who succeed is problematic.

Simply put, survivorship bias is your tendency to focus on survivors instead of whatever you would call a non-survivor depending on the situation. Sometimes that means you tend to focus on the living instead of the dead, or on winners instead of losers, or on successes instead of failures. ...

... After any process that leaves behind survivors, the non-survivors are often destroyed or muted or removed from your view. If failures becomes invisible, then naturally you will pay more attention to successes. Not only do you fail to recognize that what is missing might have held important information, you fail to recognize that there is missing information at all.

....
Survivorship bias also flash-freezes your brain into a state of ignorance from which you believe success is more common than it truly is and therefore you leap to the conclusion that it also must be easier to obtain. You develop a completely inaccurate assessment of reality thanks to a prejudice that grants the tiny number of survivors the privilege of representing the much larger group to which they originally belonged.

One of the most interesting things David McRaney says in this article is:

Your sense of a past era tends to be informed by paintings and literature and drama that are not crap, even though at any given moment pop culture is filled with more crap than masterpieces. Why? It isn’t because people were better artists back in the day. It is because the good stuff survives, and the bad stuff is forgotten. So over time, you end up with skewed ideas of past eras. You think the artists of antiquity were amazing in the same way you associate the music of past decades with the songs that survived long enough to get into your ears. The movies about Vietnam never seem include in their soundtracks the songs that sucked.

Think about it.  All those women, all those people of colour missing from history, they've all been erased, forgotten and wiped out because those writing things down only picked the 'best' and 'most important' - from their point of view - items.  Or what we're left with is simply a matter of luck.  One of my sisters once asked why we study the Illiad and the Odyssey.  What about those works makes them famous?  My answer, they survived.  She was incensed that we could be putting up on pedestals works those of the time probably considered pop culture, simply because they're some of the few pieces of literature from that era to survive.

Which brings me to the next topic.  Lee & Low Books, which publishes the Tu Books line of SFF (focusing on POC as authors and protagonists), posted a link on facebook to this tumbler account.  It posts European artworks from the fall of Rome to the present day (though it's focus is the Middle Ages and Renaissance) that depict people of colour.  And it is fascinating. 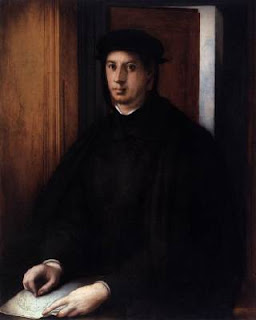 Just scrolling through the most recent entries I learned several things.  Like the first Duke of Florence was half black, the son of a nobleman and a black slave woman.  Oddly enough though the painting above toured the U.S. a few years back, no one thought to emphasize his race as a way of garnering interest in the exhibit.

Due to a kind of snobbery endemic to the field - a subject which Phillipe de Montebello at the Met in New York so unabashedly has talked about - it is not just the Philadelphia Museum but the American art establishment in general that appears to be having difficulty coming to terms with this Medici scion from whom descends some of Europe's most titled families, including two branches of the Hapsburgs.

In just the last three years, for example, a portrait of Alessandro's daughter, Giulia, Princess of Ottojano, and another portrait of the Duke himself have appeared in two major exhibitions in the U.S.: one at the National Gallery in Washington in 2001 and another at the Art Institute of Chicago in an exhibit which a few months later travelled to the Detroit Institute of the Arts where it closed in 2003. However, as with the current Philadelphia exhibit, little was done by the curators of these shows to draw the public's attention to either the Duke's color or his place in history. (Source)

History is a fascinating thing, and we've got such skewed views of it.

I hope I've given you some interesting things to think about and read.
Email ThisBlogThis!Share to TwitterShare to FacebookShare to Pinterest
Posted by Jessica Strider at 15:30