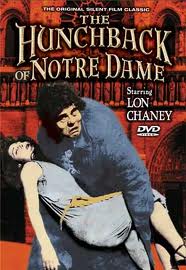 The hunchback living at Notre Dame Cathedral in Paris (Lon Chaney) hates and is hated by the populace.  Like the Arch-Deacon's brother, Jehan (Brandon Hurst), and Captain Phoebus (Norman Kerry), he becomes enamored of the gypsy dancer Esmeralda (Patsy Ruth Miller), foster daughter of Don Claudio (Nigel de Brulier) the King of Thieves.

Based on the book by Victor Hugo, this film details the treachery of Jehan, the love affair between Phoebus and Esmeralda, the torment of Quasimodo and more.  Much of the film is set in and around the Cathedral of Notre Dame, a magnificent edifice, and wonderful backdrop for such a complicated story.

I was impressed by the number of side plots the writers kept in and how expressive the actors were given the silent nature of the film.  Black and white is a great medium for a dark tale, though unlike some other b&w films I've seen the director didn't make as much use of light and shadow as he could have.

The music was fairly repetative at the beginning getting more interesting and varied as the film progressed.

Lon Chaney's performace as the hunchback was fantastic.  The make-up looked great and he managed to look hideous while still being sympathetic in the right places.

In fact, all the characters were well cast.  Esmeralda was beautiful, Phoebus charming and handsome, Jehan somewhat creepy, etc.  The acting was a bit more restrained than in other silent films I've seen, while still being expressive.

If you've read the novel, you'll notice some major changes, namely Phoebus and Esperalda not sleeping together and the happy ending they gave the film.

Still, it's well done and whether you've read the book or not there's no trouble following the plot.

The film is in the public domain and you can watch it for yourself here or here.
Email ThisBlogThis!Share to TwitterShare to FacebookShare to Pinterest
Posted by Jessica Strider at 08:30