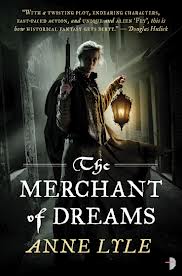 Cons: several characters started to grate on my nerves, making decisions that irked me; first third of the novel is spent on ships, with little happening plot-wise; towards the end of the book several aims are suddenly - and suspiciously easily - achieved

Mal and Coby, now living in France, discover the Skraylings are courting trade alliances with Venice, a venture that, if successful, could undermine the current arrangement with England.  They pick-up Sandy on their way to England to inform Walsingham of their news.  Mal is sent to Venice to discover the state of negotiations and takes Ned Faulkner with him.  Meanwhile Coby is tasked with keeping Sandy out of trouble in London.  Needless to say, she fails.

There's a lot of intrigue and a great sense of adventure in this sequel to The Alchemist of Souls.  There are several sea voyages, an attack by monsters, torture and the reunion of Mal and Sandy with their older brother, Charles.

Where Lyle excells is with the amount of accurate historical detail she peppers the book with.  She's careful about using period expressions and terminology, making the book feel authentic.

We also learn more about Skrayling magic in this book.  Mal is tutored in dreamwalking, and starts to accept that part of himself.  Meanwhile, despite having two personalities, Sandy's Skrayling identity as Erishen is dominant, and has no qualms about using magic to further his aims.

There were several things I didn't like about this book.  Sandy's personality started to grate on my nerves early in the book as he cares nothing for the humans around him or the problems he causes.  He sees nothing wrong with manipulating others with magic to get what he wants.  I mention the other issue that bugged me with regards to the characters in the spoiler section as it deals with things later in the book.

A lot of the action for the first third of the book took place on boats.  While a long sea journey between London and Venice is realistic, nothing important seems to happen and the book starts to drag.  Conversely, in Venice things go slowly for a while and then, suddenly, everything happens quickly, with events that seemed difficult before all happening in quick succession.  In other words, it seemed too convenient that all their plans suddenly worked without problem.

The ending brought back complications and did a good job of keeping the tension and action high.  The characters face real consequences for their actions earlier in the book (though a few things are swept under the rug - which I mention below as well).  I was impressed by how well the author tied up the loose ends, given the state of affairs at the end of the book.

I found this second volume more problematic and less enjoyable than the first, but it did have some redeeming features and leaves enough questions hanging that I'll definitely finish the series.

Ned's attempts to seduce Mal annoyed me as I like my characters to stay paired and I consider him and Gabriel a couple (as do they but with more a more open relationship than I like).  I'll admit this is a personal preference and may not bother other readers.  Mal's affair later in the book bothered me for similar reasons.  I wanted him and Coby to get together and saw this as a betrayal of her trust.  It also bothered me because in both cases, the seducers were pushing Mal to do something it appeared he didn't want to do.  Given the ending of the book, I'm also annoyed that he and Coby don't discuss what happened and whether Mal will act like that again in the future.

I was a bit annoyed that Mal and Ned were released from jail so easily and without explanation.  It seemed highly unlikely that an inquisitor, who's just heard a confession of murder, would let his quarry go like that, regardless of how much sway Olivia had.

The book Sandy steals at the beginning of the novel, that seems so important, suddenly vanishes from the plot and is only mentioned again briefly at the end.  I know he learns the critical piece of information he needs from it, but I still expected to see him translate more of it as the story progressed and was surprised that this otherwise important plot point was ignored.  Maybe in returns in book 3?
Email ThisBlogThis!Share to TwitterShare to FacebookShare to Pinterest
Posted by Jessica Strider at 08:30