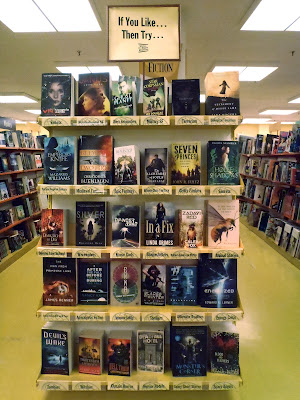 This is my third year doing this reading list.  It's based on an endcap display I do for the bookstore where I work.  Basically I pick books (mostly) from this year that fit specific SF/F/H categories.  These aren't 'best of', they're more 'you may not have seen these', titles, including several smaller press books.  Similarly, some categories that I would have added (like Western Fantasy) aren't here as I've done separate displays for them.  Not all of them fit on the endcap at the same time, but I need extras for when books start selling out.  That's why you'll notice the written list has more books than the picture shows.  Oh, and I've increased the number of horror titles on the list.

Thanks so much for including GHOST PLANET, and for posting the pic! I love seeing it in the wild. :)