Audiobook Review: War of the World by H. G. Wells 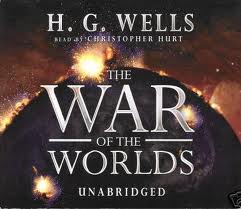 This review requires a preface.  I listened to this on vacation in the Dominican Republic, where it was very hot and sunny.  I also wasn't sleeping well.  As a result of listening, rather than reading, I often closed my eyes to avoid the glare of the sun on the beach and, would subsequently, fall asleep.  So I got through this book rather sporadically, having to rewind and listen to things twice because I wasn't paying attention the first time and making a general mess of the experience.  Please keep that in mind as you read this review.

Cons: disjointed reading made it hard to remember the numerous details Wells peppered the novel with, pseudo-science

A professor & writer of philosophy details what he witnessed during the Martian attack of London and its environs.

As with other books of the period, The War of the Worlds is presented as the narrator's account of true events.  The book tries to make the science plausible, explaining what the Martians must have been thinking, why they attacked and how they got their ships to Earth.  The story pauses at times to explain what the Martians look like, how their machines work and how quickly the red weed they brought with them grows.  While Wells tries to get his science right he ultimately fails since there was so much he didn't understand about space travel, etc.

The ending of the book, which always seemed so strange given the obvious advanced knowledge of the Martians makes sense here, given their evolution and difficulty in examining the Earth at close range (based on the science of the time).  In other words, if, like me, you've only seen the film (and I mean the 1953 version), then you don't know the real story.  In fact, much that happens in the film is not in the book and vice versa, particularly the love story (in the book the protagonist spends most of his time trying to rejoin his wife, whom he fears has died in his absence).  Similarly, the book has only minor religious overtones, much less than the film.

The book includes a lot of details about the Martians, their looks, actions, etc. but there are few details about their feeding, which is presented as a horror and then ignored.  I'd have liked to know more about that, as it played a large role in their invasion.

I highly recommend the audiobook.  I've found from reading other Wells novels (Invisible Man, Island of Dr. Moreau) that his narrative style is rather dry and hard to read at times.  But listening to the book, well, that was an experience.  The narrator really made this come alive (my fatigue notwithstanding).
Email ThisBlogThis!Share to TwitterShare to FacebookShare to Pinterest
Posted by Jessica Strider at 10:36